At long last, as part of the BATTALION Project, our nationwide, longitudinal, microbial population study here in Norway has been published in Lancet Microbe. Funded by the Trond Mohn Foundation national program on antibiotic resistance, this study took advantage of NORM, Norway’s surveillance system for antimicrobial resistance, and collected 3397 E. coli bacteraemia isolates from 15 clinical microbiology labs from 2002-2017. Of those, 3254 isolates were successfully sequenced at the Wellcome Sanger Institute.

Key findings of the study include that a multidrug resistant, high-risk clone, known as CC131, showed the largest clonal expansion over time, and it is the most important clone responsible for the increase in ESBL-prevalence and fluoroquinolone resistance in Norway. More interestingly, we found the early and sustained establishment of a predominantly antibiotic susceptible CC131 subclade in the population, suggesting that antibiotic resistance is not necessary for clonal success.

In addition, we're also excited to announce several newly published papers that have come out of the MicroPop group over the last few months! More info on the publications to come soon, but in the meantime check out the full texts below!

On February 25th, Pål had the pleasure of serving as an opponent in the PhD defense of Dr. Petter Langlete from the University of Oslo. Petter's thesis dove into the isolation of extracellular vesicles in bacterial cells, specifically in regards to characterising and understanding their genetic cargo. Vesicles are small 'sacs' that are secreted from the membranes of living cells, and they play important roles in things like vaccine and drug development, cancer treatments, medical diagnostics, and much more!

This was a very interesting defense to be a part of, and you can check out and read more about Petter's thesis here!

He gave a talk entitled "Bacterial barriers to plasmid acquisition". 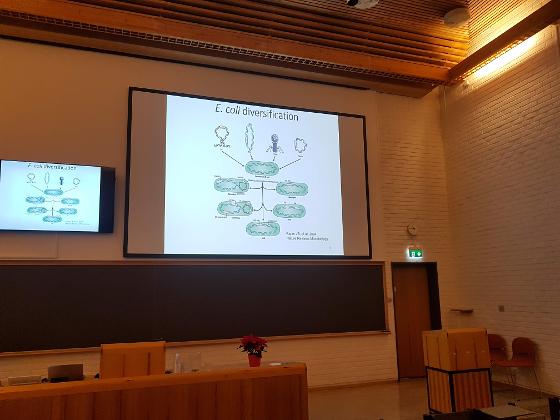 November, 4-5: Researchers from the Microbial Pharmacology and Population Biology Group (MicroPop) participated to the 3rd Annual Meeting of The National Graduate School in Infection Biology and Antimicrobials (IBA) in Bergen.

September, 4-6: Researcher Klaus Harms joined the 12th International Symposium on the Biology of Acinetobacter in Frankfurt, Germany. At the meeting he presented his latest research on how "DNA single-strands cause microindel mutations."

August, 13-16: researcher Julia Maria Kloos participated to the 5th Annual Meeting of the International Society for Evolution, Medicine, and Public Health that was held in Zürich (CH). She presented a poster entitled "Evolution towards reduced burden of clinical antibiotic resistance plasmids".

In the same days, he was invited to give a talk entitled "Why E. coli ST73 are not good plasmid hosts" at the University of Exeter, Penryn Campus.

Additionally, they were both invited speakers at Center for Ecology, Evolution and Environmental Changes (CE3C), Faculty of Sciences, University of Lisbon (FCUL).

May, 8-10: the first meeting organized by iResist Consortium took place on the Island of Sommarøy, just outside Tromsø. Lecturer and researchers from Norway and Europe shared their experiences and knowledge on AMR in order to work together on new projects. 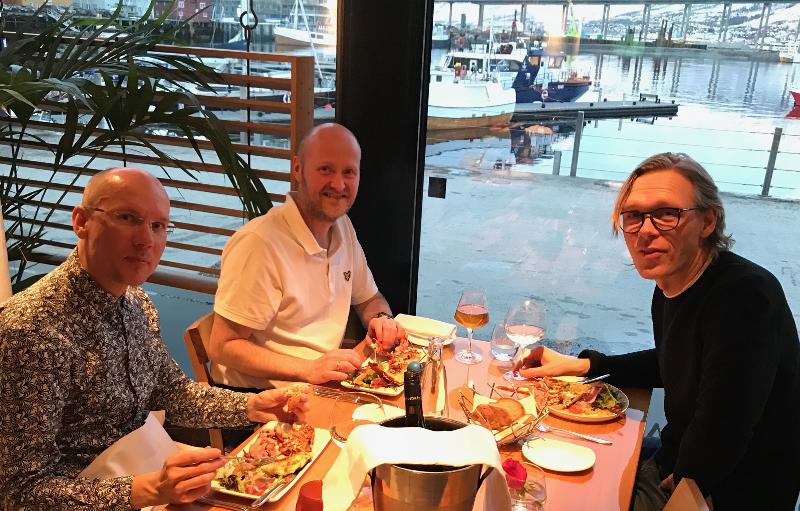 Nov 26-30: Prof. Pål J. Johnsen and Prof. Ørjan Samuelsen were invited to give key- note lectures at a joint course between IBA and the Swedish National Doctoral Programme in Infections and Antibiotics (NDPIA) held in Gothenburg, Sweden.

Nov 1st: MicroPop and IFA celebrate the one and only Klaus Harms' 50th birthday

On the 29 and 30 October, MicroPop group members participated in the annual meeting with IBA – The National Graduate School in Infection Biology and Antimicrobials. Pål and João held presentations during the meeting.

Chris Marx from University of Idaho visited MicroPop. Chris gave and excellent talk at the Faculty and we had good project discussions.

September 11: MicroPop in national media! Pål and some of his lab members were on the news with promising results as published in the paper published last month. Watch it on NRK's internet TV here.

A piece was also written about it at NRK's websites.

May 31st: Pål invited to give a talk at the Wenner-Gren Symposium in Stockholm: Antibiotic resistance: Evolutionary concepts versus clinical realities. May 31-June 2. 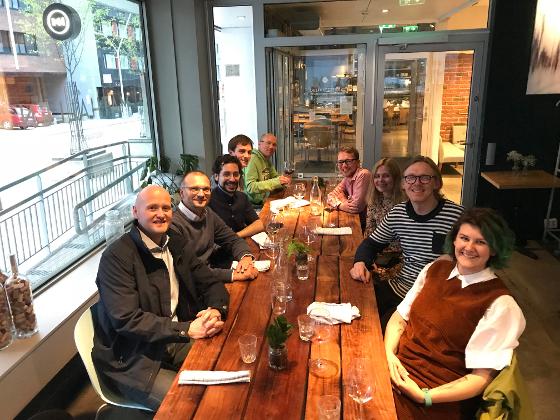 April 21-24: The MicroPop group went to Madrid for the 28th ECCMID conference. Christopher Fröhlich, a PhD student associated with MicroPop, was selected to give an oral presentation. 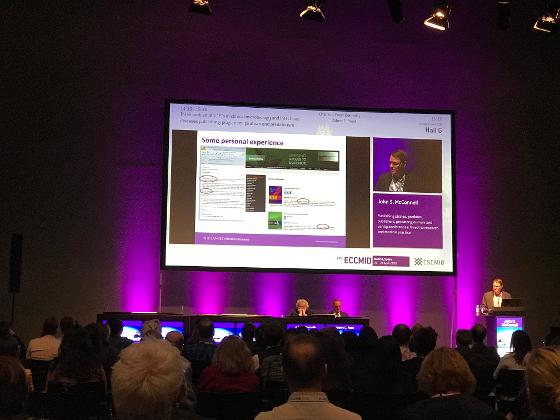 In the beginning of April, Pål met with his consortium partners for the biofilm project, funded by the Olav Thon Foundation, in Leiden, the Netherlands to discuss the future of the project. Group members Pål and Nicole also met with the partners in the JPI-AMR consortium, also in Leiden.

On March 10, Prof. Pål J. Johnsen attended the ceremony where he received the research award from Olav Thon and his research foundation in Oslo. 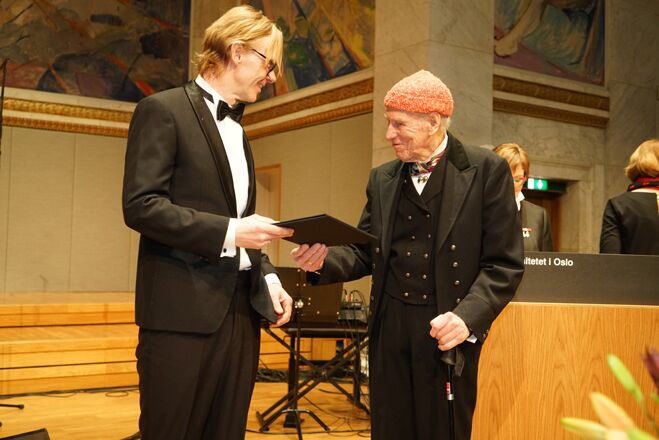 Prof. Pål J. Johnsen is partner in the new research project "Development of Antibiotic Resistance in Bacterial Biofilms" that was awarded NOK 10 million from the Olav Thon Foundation. The grant aims to incentivise increased Nordic collaboration within medical research. It is led by Dan I. Andersson at the University of Uppsala, Sweden, and partnered by Prof. Hanne Ingmer, University of Copenhagen, Denmark.

NOK 2 million was granted to the iResist consortium - a network of eight partners headed by Prof Pål J. Johnsen. This grant will support the network in increased grant application activity and more competitive applications for Norwegian health researchers directed towards EU funds, such as Horizon 2020, all within research on infectious diseases and antimicrobial resistance in a one health perspective.

Klaus Harms got a grant from the Norwegian Research Council worth NOK 7.5 million for his project "Molecular and Evolutionary Characterization of Short-Patch Double Illegitimate Recombination, A Recently Discovered Mutation Mechanism". Congratulations!!

PhD course in Antimicrobial Resistance was held in Tromsø. Profs Pål J. Johnsen and Ørjan Samuelsen gave several lectures, as well as our collaborative partner from the University of Leiden in the Netherlands, Prof. Daniel Rozen. The group members were well represented among the attendees!

Lab outing with beer tasting at the local brewery Bryggeri 13, followed by a guided city walk and dinner at a restaurant.

In relation to the National Research Days, our lab members Elizabeth, Julia and Vidar joined the Infection Biology Research Group's activities on the research day for kids. They won an award for best activity.

Prof. Pål J. Johnsen won the Faculty of Health Sciences' Research Prize for 2017. His efforts in running a well-functioning and successful research group and establishing locally, nationally and internationally rooted research networks, as well as recruiting young, successful group leaders to the department, were highlighted factors when he was awarded the prize.

We participated in the ECCMID conferance in Vienna, Austria. We presented the poster "Factors affecting the sign, magnitude, and generality of collateral susceptibility networks in clinical Escherichia coli strains".

ECCMID is to be held 22 - 25 April 2017 in Vienna, Austria. ECCMID continues to be one of the largest, most comprehensive and most influential congresses in the infection field.

The paper is entitled "Substitutions of short heterologous DNA segments of intragenomic or extragenomic origins produce clustered genomic polymorphisms", and was accepted in the Proceedings of the National Academy of Sciences (PNAS) journal. Congrats to first author Klaus Harms, and former group members Asbjørn Lunnan, Nils Hülter and Kaare M. Nielsen for excellent contributions. The paper is the result of collaborations between us in Tromsø and researchers from Boston and Copenhagen.

We are exited about coordinating a JPI-EC-AMR grant where UiT get 2 Work Packages:

Nov. 5: New paper accepted in The ISME Journal, with collaborator Jan Engelstädter from the University of Queensland! In this paper, we theoretically explore the evolution and maintenance of integrons – the fascinating gene capture and re-shuffling devices found in many bacteria.