Mohamed Ezat has investigated climate changes in the Norwegian and North Atlantic seas that have occurred over the past 135 000 years. 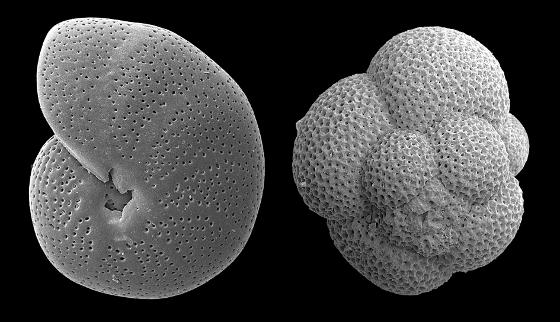 The sea is a very important regulator of the global climate.  It circulates heat and affects the concentration of greenhouse gases in the atmosphere.  The exchange of hot surface water from the sea area near the equator, and cold deep sea water from the Arctic is an important part of the global sea circulation.  Ezat has studied how this water exchange and how the carbon cycle in the ocean have been affected by the last ice ages, and whether they have influenced climate changes.

"My PhD work has resulted in more information about exchange of heat and carbon between the North Sea and the North Atlantic over the last 135 000 years.  Our new data has given us the possibility to test earlier hypotheses that deal  with the sea's circulation in the North Atlantic, and how this is linked to historical regional climate changes, the marine carbon cycle and CO2 in the atmosphere" says Ezat.

He has also analyzed sediment samples from the ocean floor outside the Faeroe islands.  Calcite shells of dead microorganisms pile up on the ocean floor  and become layered in the sediments like a climate archive.  The calcite shell composition is also affected by temperature, pH and CO2 concentrations and will therefore be a product characteristic of its time period.

Researchers have reconstructed the sea temperature, salinity and carbonate chemistry (pH and CO2) thousands of years back in time and looked at the concentrations of greenhouse gases in the southern Norwegian Sea. They have compared the conditions to the North Atlantic and found that the Norwegian Sea physical environment and exchanges with the North Atlantic changed according to regional climate changes in the past.

"This suggests that the circulation of water masses we have looked at, and the carbon cycle in the sea played an important role as an amplifier of past climate changes" says Ezat.

On Friday, July 3rd 2015 Mohamed Mahmoud Ezat Ahmed Mohamed defended his thesis entitled: "North Atlantic-Norwegian Sea exchanges during the past 135 000 years: Evidence from foraminiferal ∆14C, d11B, d180, d13C, Mg/Ca and Cd/Ca."  His work was performed at CAGE, Department of Geology, UiT and was funded by UiT, the Mohn Foundation and the Research Council of Norway. Supervisors were Tine Rasmussen Lander, Department of Geology, UiT and Jeroen Groeneveld, University of Bremen, Germany.

How to get the best performance from female footballers
15.11.19
Monitoring whales with drones
05.04.19
Confronting one of our greatest challenges – plastic waste in nature
04.04.19
IODP ekspedisjon 379 i Amundsenhavet, Antarktis
11.02.19
Environmental changes after the great oxygenation event
10.12.18
Algebra meets statistics at Summer School in Tromsø
15.10.18
Deglaciation of the northern Svalbard margin
30.05.18
Time travel through methane seeps, using tiny time capsules
11.05.18