Join the newly formed UiT Interdisciplinary Human Rights Research Network, the Centre for Women's and Gender Research, and Tromsø Kvinnefronten for a  University-sponsored screening of the award-winning film "Sisters Rising" at Verdensteatret.

The film will be followed by a short discussion on the links between extractive industries, colonialism, gendered and racialized violence, Indigenous sovereigty, and human rights instruments. Leading the discussion will be Ph.D. candidate Kerstin Reibold (Department of Philosophy), Postdoctoral fellow Lena Gross (SESAM) and guest researcher Ellen Marie Jensen (Centre for Women's and Gender Research).

Seats are limited at Verdensteatret. Tickets are free, but they must be ordered in advance here: https://verdensteatret.ticketco.events/no/nb/e/sisters_rising

See the COVID-19 regulations at Verdensteatret here (in Norwegian only) https://intranett.uit.no/vis-tavla?p_document_id=708914

Native American women are 2.5 times more likely to experience sexual assault than all other American women. 1 in 3 Native women report having been raped during her lifetime and 86% of the offenses are committed by non-Native men. These perpetrators exploit gaps in tribal jurisdictional authority and target Native women as ‘safe victims’. SISTERS RISING follows six women who refuse to let this pattern of violence continue in the shadows: a tribal cop in the midst of the North Dakota oil boom, an attorney fighting to overturn restrictions on tribal sovereignty, an Indigenous women’s self-defense instructor, grassroots advocates working to influence legislative change, and the author of the first anti-sex trafficking code to be introduced to a reservation’s tribal court. Their stories shine an unflinching light on righting injustice on both an individual and systemic level.

​"The abhorrent violence that is a constant in the lives of Indigenous peoples impacts Indigenous women first,” says Co-producer Jaida Grey Eagle (Ogala Lakota), “We are on the frontlines of an ongoing legacy of violent colonization, and it is vitally important that the world see and hear us.”

More about the film: https://www.sistersrisingmovie.com/

More about the UN International Day for the Elimination of Violence against Women: https://www.un.org/en/events/endviolenceday/ 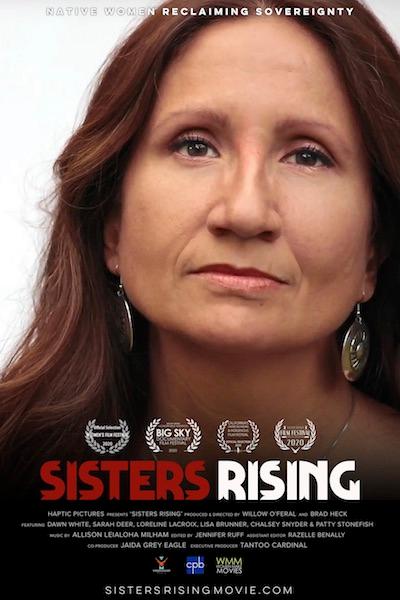