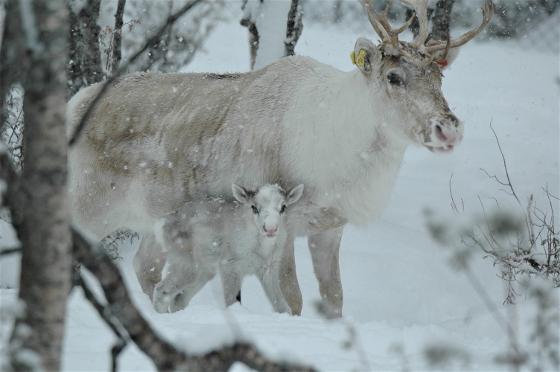 Birth in the Arctic

ASTI are happy to announce the birth of 6 reindeer calves

Birth in the Arctic

ASTI are happy to announce the birth of 6 reindeer calves

We maintain a herd of Norwegian reindeer to research the physiological adaptations to the arctic in this species. We are thrilled to announce that we have 6 new additions to the herd and wish to share some pictures of our newborns enjoying their snowy outdoor enclosure. 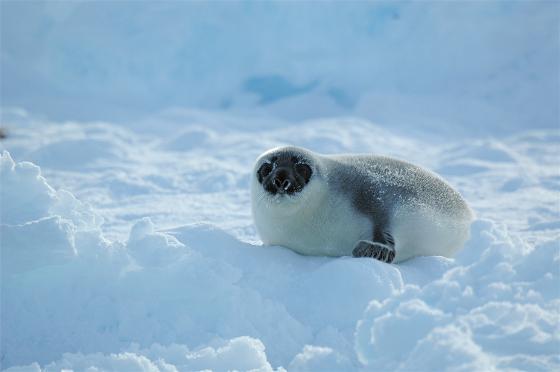 ASTI members Lars Folkow, Chiara Ciccone and Shona Wood have recently returned from the east coast of Greenland, referred to the West ice (Vestisen) in Norway. The aim was to conduct multiple research projects in the ice but also run a research-led teaching cruise for UiT BIO-2310 students. ASTI aimed to contribute to the specific ASTI research project Clocks, hypoxia and metabolism.

ASTI members Lars Folkow, Chiara Ciccone and Shona Wood have recently returned from the east coast of Greenland, referred to the West ice (Vestisen) in Norway. The aim was to conduct multiple research projects in the ice but also run a research-led teaching cruise for UiT BIO-2310 students. ASTI aimed to contribute to the specific ASTI research project Clocks, hypoxia and metabolism.

Diving mammals have evolved several adaptations that enable them to cope with the limited availability of oxygen (hypoxia). Among pinnipeds, the hooded seal (Cystophora cristata) has remarkable diving capacities. A goal of ASTI is to develop methodologies to study hypoxia tolerance in a physiologically relevant model but while minimising the use of animals while maximising the quality of data.

The hooded seal is known for its remarkable diving capacities: dives as long as 1 hour and as deep as 1600 m have been recorded (Folkow and Blix, 1999; Andersen et al., 2013; Vacquie-Garcia et al., 2017). Because of these abilities, the hooded seal has been considered an ideal research model in both diving and hypoxia-tolerance physiology in a wide number of studies (Folkow et al., 2008; Mitz et al., 2009; Vázquez-Medina et al., 2011; Fabrizius et al., 2016; Geiseler, Larson and Folkow, 2016; Hoff et al., 2016, 2017; Geßner et al., 2020). However, access to these animals is limited, they are only accessible in the breeding season (March) located within the pack ice off Jan Mayen/east coast of Greenland, Davis Strait and the coast of Labrador.

PhD student Chiara Ciccone and MSc student Fayiri Kante have been developing techniques to grow cells from these animals with the hope of making 100’s of experiments possible from one animal. We are happy to report that our recent trip was very successful, and we have many cells happily dividing in dishes ready for experiments over the next year into hypoxia and the interactions with the circadian clock in a highly hypoxia tolerant mammal.

We would like to thank the Helmer Hanssen crew and Captain for a successful research trip and the BIO-2310 UiT students for a fun research-based teaching opportunity. Final thanks go to the two polar bears that made a guest appearance on the ice. 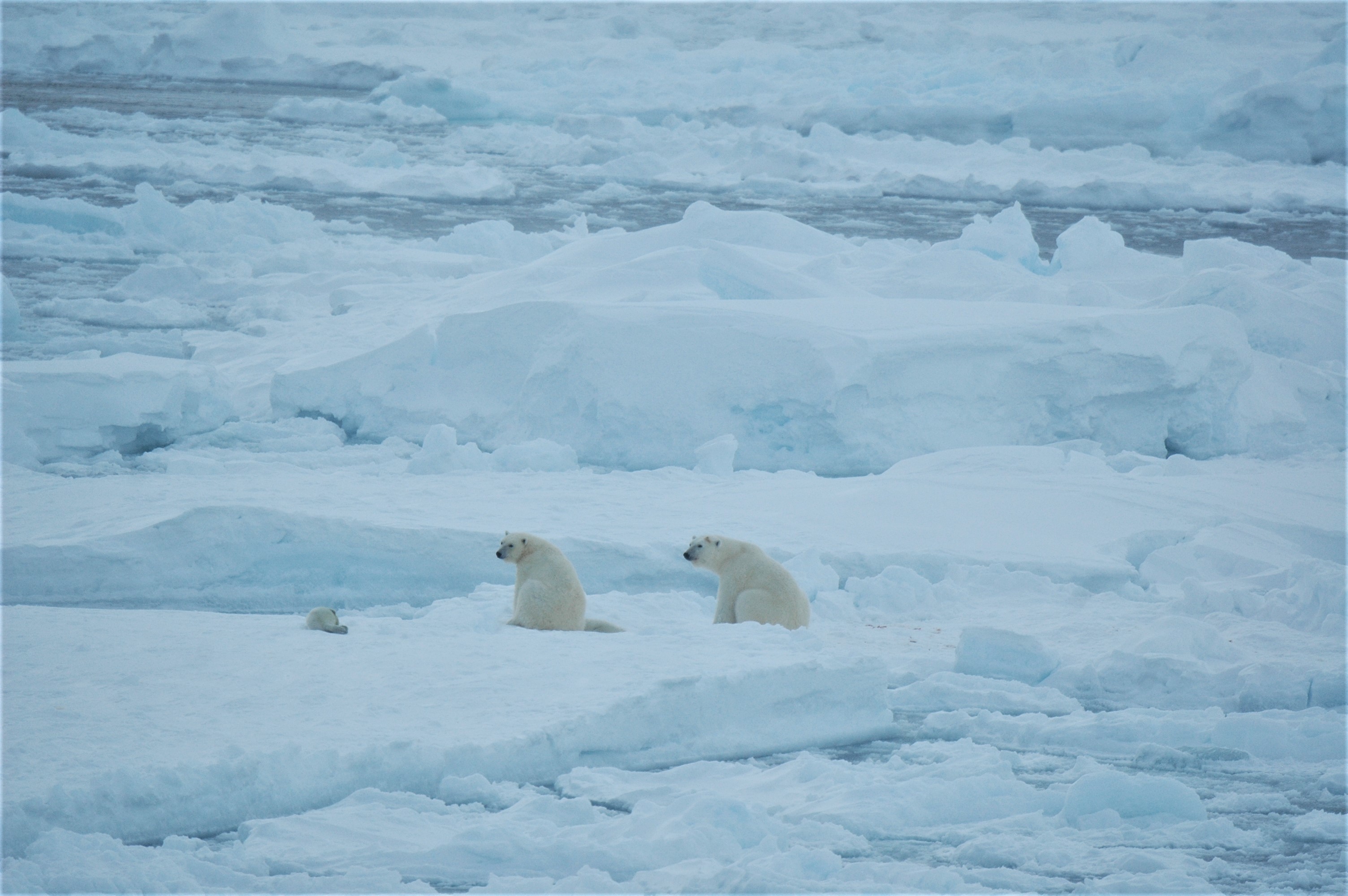 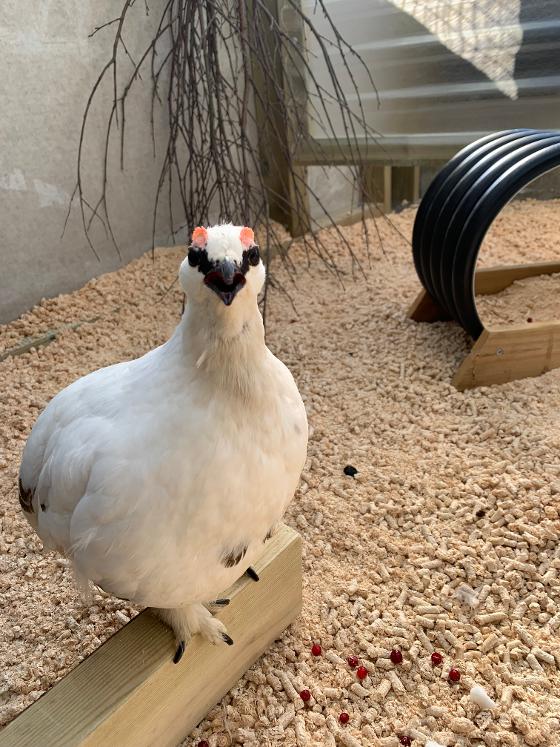 Our Svalbard ptarmigan get a new home

This Monday (04.04.2022), we proudly transferred our first Svalbard ptarmigans into the newly finished aviary.

Our Svalbard ptarmigan get a new home

This Monday (04.04.2022), we proudly transferred our first Svalbard ptarmigans into the newly finished aviary. 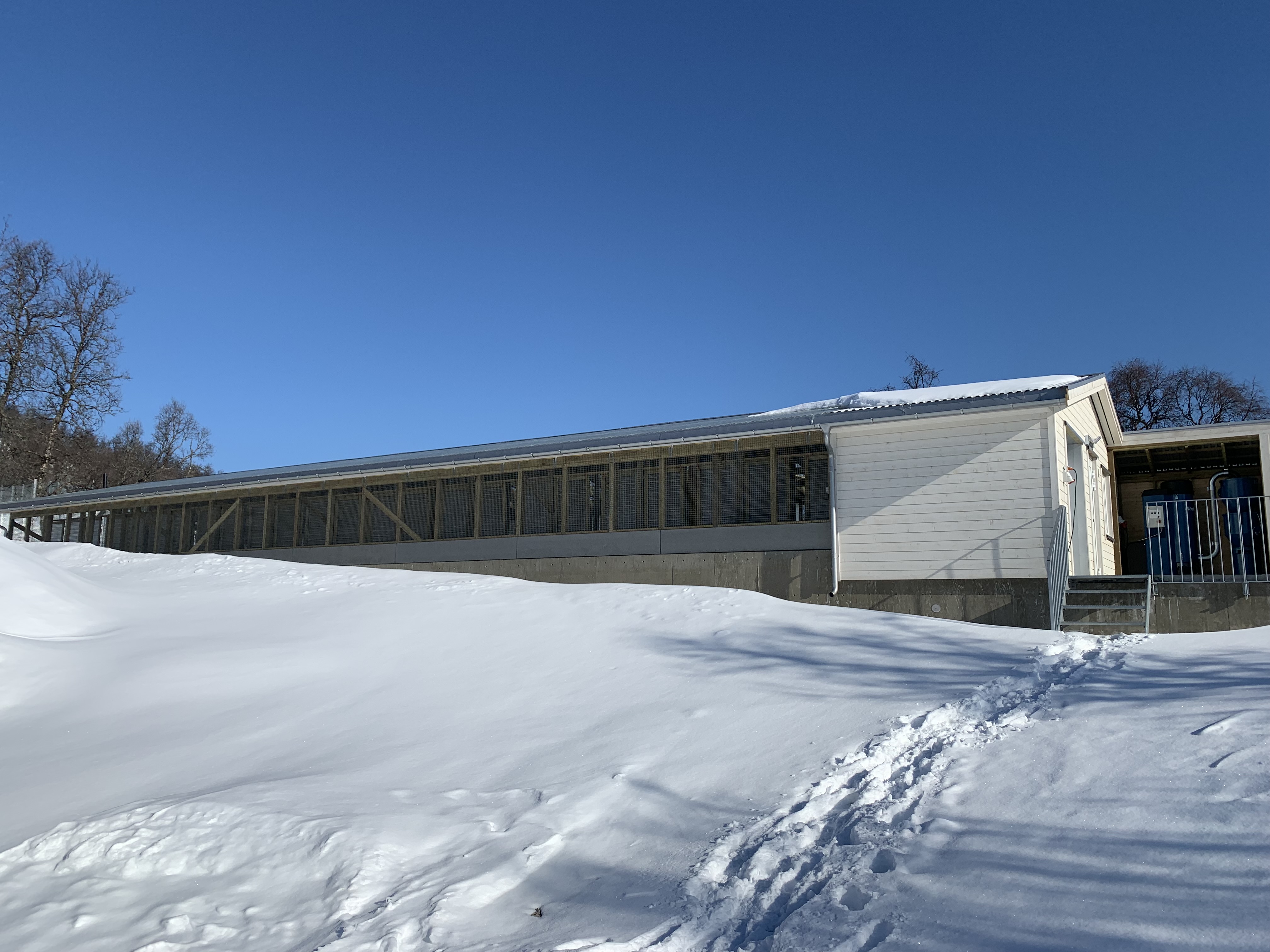 Now, our birds have not only more space to pursue their ptarmigan ambitions but are also matched with their partners for the upcoming breeding season. Talking of love birds. While some were stunned by their new surroundings, others wasted no time to vocalise their arrival and showing the new furniture who is boss.

We are all looking forward to the new and exciting research possibilities. 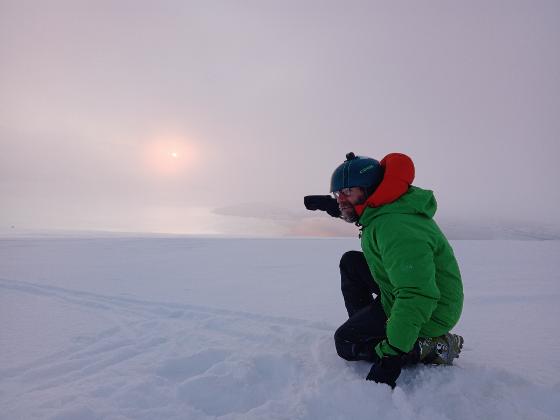 Over a period of weeks, painstaking research appeared to be leading nowhere, with attempts to find our favourite celestial body becoming ever more desperate. Indeed Prof Jørgen Berge, Dean of Biosciences (and some other stuff) in Tromsø, who was definitely not involved in this study, hypothesised that the most likely explanation was that the Sun had disappeared beneath the sea – explaining the maintained circadian entrainment of plankton even in December.

Rejecting this hypothesis, ASTI researchers Wood and Hazlerigg bravely set out on mission to find the Sun, armed only with a large thermos of sweet tea. To their surprise, slightly before midday today, they spotted their quarry in a southerly direction, just above the horizon. In a further development they also found their shadows, refuting earlier suspicions that they had become vampires.

“Imagine our amazement, it was big and orange and made us feel happy” said Dr Wood, who led the study.

“Re-discovering the Sun, is perhaps the most important thing for life in the Arctic” said Professor Hazlerigg, who has been unusually grumpy these last two months.

“If they had only bothered to consult the published literature, they would have realised that this happens every year”, said Professor Arnoldus Blix, who was very definitely not involved in the study, but knows more than most about the old literature.

Nevertheless, this is a great discovery for the residents of Tromsø with wide-reaching significance for mental health, vitamin D deficiency, obesity, chrono-disruption and world peace.

ASTI extends its condolences to the residents of Svalbard who are yet to re-discover the sun.  Plans to send Professor Hazlerigg to the high Arctic archipelago to help with efforts to find the sun are in process with the Governor of Svalbard.

The appointee will be expected to develop their own main line of research to complement and augment parallel research programmes within ASTI, and to align with one or more of the overarching thematic headings: Core seasonal timer mechanisms and outputs; Comparative seasonal chronobiology; One seasonal health.

The appointee will become an integral member of the Arctic Chronobiology and Physiology research group, which is based on the UiT Brevika campus and leads the ASTI programme. This is a young and growing research grouping with a strong collective ethos of interdisciplinarity and collaboration, which will offer excellent opportunities to co-develop collaborative projects under the ASTI umbrella.

Membership of this group will provide excellent further training and career development opportunities, in both research and pedagogical aspects, enabling the appointee to compete for future long-term career positions.

For further information regarding this position, please contact Professor David G. Hazlerigg, david.hazlerigg@uit.no phone +47 77 64 48 71 and look at the full description of the position here:

More coverage for our ptarmigan!

Do Svalbard ptarmigan need a circadian clock in a rather arrhythmic environment such as the High Arctic? During the polar day and polar night, which makes up 2/3 of their seasonal life, they are active around the clock. This suggests a lack of circadian control over behaviour. However, in a recent study from our ACP-research group we showed that the circadian clock is still an integral part of seasonal timekeeping.

Do Svalbard ptarmigan need a circadian clock in a rather arrhythmic environment such as the High Arctic? During the polar day and polar night, which makes up 2/3 of their seasonal life, they are active around the clock. This suggests a lack of circadian control over behaviour. However, in a recent study from our ACP-research group we showed that the circadian clock is still an integral part of seasonal timekeeping.

While circadian based seasonal timing is widely accepted in the field of chronobiology, our study is the first to show that the same mechanism operates in permanent residents of the High Arctic.

Hence, Svalbard ptarmigan display a chronobiological adaptation perfectly suiting their habitat. They can ignore their circadian clock in terms of behaviour but are still able to utilize it in order to time seasonal events such as reproduction.

The study is published in Current Biology and is featured in Nature News.

The high impact of the article clearly shows that the world craves more research on Svalbard ptarmigan. Luckily, the ACP-research group combined with the newly founded Arctic Seasonal Timekeeping Initiative (ASTI) is ready to provide.

Hibernation is a physiological and behavioural adaptation that permits survival during periods of reduced food availability and extreme environmental temperatures in several mammalian species. This is achieved through cycles of metabolic depression and reduced body temperature (torpor) and rewarming (arousal).

From an human perspective, the ability of hibernating animals to arouse to a normal body temperature state after extended periods of cooling to temperatures as low as 0 degrees is nothing short of miraculous. We aim to focus on the role of the brain in this process, and the issue of how it maintains the ability to control temperature within safe limits during torpor, and then subsequently drives and co-ordinates rewarming of the organism. This undertaking addresses a basic biological mystery with great applied importance: how hibernators allow their brains to cool and become hypoxic and are then able to re-warm them returning to a healthy euthermic state, this is of clear biomedical relevance in terms of tissue/organ cryopreservation and transplantation, surgery and recovery from hypothermia.

Deep thanks and acknowledment go to PhD students Vebjørn Melum and Fredrik Markussen in making this possible. More information on the facility and project aims can be found on the ASTI website: https://uit.no/research/asti/project?pid=717950

An exciting week for the members of ASTI with two PhD thesis successfully defended.

An exciting week for the members of ASTI with two PhD thesis successfully defended.

Congratulations to Dr. Daniel Appenroth who successfully defended his PhD thesis entitled "Circadian-based processes in the high Arctic: activity, thermoregulation and photoperiodism in the Svalbard ptarmigan (Lagopus muta hyperborea)" on the 15th April 2021.
You can read Daniel's thesis and the three published papers here. Daniel was supervised by the ASTI centre director Prof. David Hazlerigg and ASTI researcher Dr. Alex West, along with Dr. Gabi Wagner. The evaluation committee consisted of Professor Brian Follett (1. opponent) and Dr. Gisela Helfer (2. opponent), with ASTI's Professor Lars Folkow as the internal member and leader of the committee.
Congratulations to Dr. Marianne Iversen who successfully defended her PhD thesis entitled "Photoperiodic history-dependent preadaptation of the smolting gill" on the 16th April.
You can read Marianne's thesis and three published papers here. Marianne was supervised by Prof. David Hazlerigg and Prof. Even Jørgensen. The evaluation committee consisted of Associate Professor Steffen Madsen, University of Southern Denmark, Denmark (1. opponent) and Professor Jon Vidar Helvik, University of Bergen (2. opponent), with Dr. Eva-Stina Edholm, an ASTI collaborator in the Norwegian College of Fishery Science as internal member and leader of the committee).
An excellent two days of science representing all the hard work relating to seasonal timing we do here at ASTI. Hopefully many more successful defences and papers to come!
Lenke til nyhet