Dr. Eddy Carmack and the team behind The Meaning of Ice 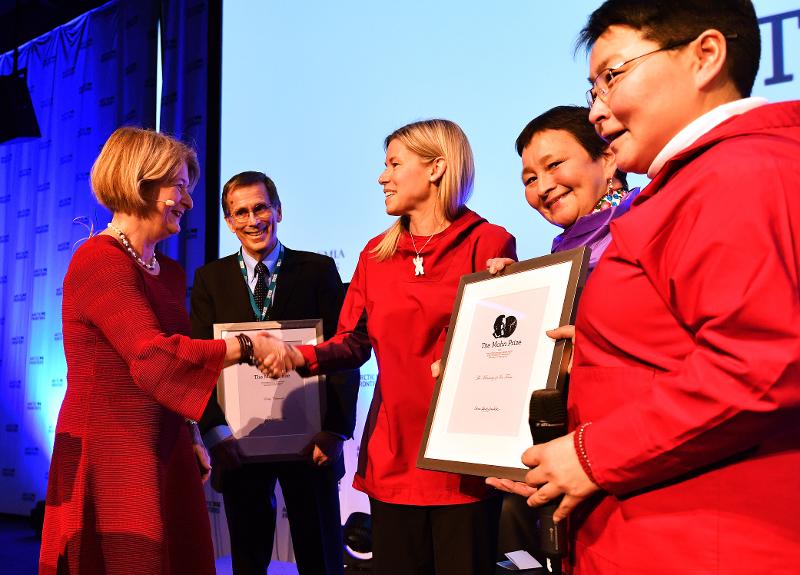 The Scientific Committee wrote in its recommendation:

The Meaning of Ice Team

The Meaning of Ice project involves a core of 13 scientists and indigenous knowledge experts from Alaska, Canada, and Greenland (hereafter, MI Team), who provided leadership in designing and implementing the research project entitled "The Dynamics of Human-Sea Ice Relations: Comparing Changing Environments in Alaska, Nunavut, and Greenland", conducted during 2006-2011 (also known as "Siku-Inuit-Hila"/Sea Ice-People-Weather). They led the publication of the project’s results in scientific papers, professional presentations, and a book, The Meaning of Ice. People and Sea Ice in Three Arctic Communities, published in English and three indigenous Arctic languages (North Alaskan Inupiaq, Central Canadian Inuktitut, and West Greenlandic Kalaallistun). The project involved over 40 participants, the overwhelming majority of whom are Arctic indigenous knowledge experts.

Excellence in research/development of groundbreaking new knowledge
This project made a groundbreaking contribution to our understanding of Arctic ice-dominated systems via a highly innovative combination of natural science, social science and indigenous knowledge. Through rigorous observations of ongoing changes, using both scientific and indigenous criteria and indicators, the MI Team produced a suite of expertise, concepts, and perspectives hitherto mostly inaccessible to oceanographers, sea ice scientists, and marine biologists who rely on instrumental data. The team has verified collected data via open community-based methods; pioneered the use of indigenous terminologies for types of ice and conditions, weather, and other natural phenomena; and disseminated the results via peer-reviewed academic publications, professional presentations, community meetings, social media, online databases, and other appropriate means. The matching of data, interpretations, and expertise from these different types of knowledge has never been done on such a scale. The team produced a new understanding of the changing conditions in the Arctic, from the perspective of people using sea ice and interpreting its dynamics in their own concepts and terms, on spatial and temporal scales not addressed by science teams working alone.

Recognized Leadership in the Field
We recognize the MI Team as the leader in studying indigenous interpretations of change in the Arctic and in integrating diverse types of knowledge. It achieved: (i) an unparalleled level of engagement of community knowledge experts from three Arctic countries with scientists from various disciplines; (ii) a stream of publications reporting the results in journals across a range of disciplines; (iii) a long-term commitment to evaluating change in the same areas; (iv) the extensive use of indigenous knowledge concepts and languages; and (v) attention to many indicators and factors relevant to local sea ice users, including ice safety and a groundbreaking (for natural scientists) holistic interpretation of sea ice, weather, habitat, and biota changes. The MI Team generated outstanding publications in collaboration with prominent scientists beyond the original core group. The increased use of indigenous knowledge is one of ICARP-III’s recommendations: this project impressively advanced methods to achieve this goal. We conclude that this project exemplifies a major development in Arctic science that will stimulate others to make use of similar procedures to address a wide range of topics in the coming years.

Highlight issues that are of particular relevance to the future development of the Arctic
The MI Team generated three conclusions critical to (i) the future of the Arctic relating to the impacts of rapid environmental change on polar residents and ecosystems, and (ii) the contributions of science to the development of a sustainable Arctic. Changes in the Arctic environment are now verified independently by both scientific methods and observations of the Arctic residents. Inherent to a sustainable Arctic is resilient local communities continuing their use of ice-dominated environment based on established knowledge systems, culture-based values, and indigenous languages. Academic studies of sustainability in the Arctic and in society at large stand to benefit from the power of multiple perspectives, the diversity of knowledge systems, and partnerships among physical, natural, social, and indigenous science.

Dr. Carmack is Senior Research Scientist Emeritus, Fisheries and Oceans Canada. He has served as lead Climate Oceanographer for Fisheries and Oceans Canada (1986–2011) and as the Sydney Chapman Chair at the University of Alaska, Fairbanks, AK (2006–2014). He continues to be one of the most active Arctic scholars, publishing a total of 206 refereed papers and counting (44 as first author), in the fields of high- latitude oceanography, limnology and hydrology, with emphasis on interactions among the physical environment and biological and geochemical systems. He has over 16,700 citations (6,500 since 2012, and counting), an h-index of 64, and an i10-index of 162, with an estimated 200 coauthors from dozens of countries. He has had an impressive 93 field missions, with the 94th ahead.

Excellence in research/development of ground-breaking new knowledge
Eddy Carmack can be considered the most influential and cited oceanographer at work in the Arctic Ocean. No one has shaped our knowledge about this least known ocean of the planet more than Dr. Carmack. The excellence of his research is reflected in his many extraordinary contributions on water mass formation, thermohaline circulation, mixing, shelf dynamics and freshwater budgets in the Arctic; on evidence and impacts of climate variability in subarctic and arctic seas; on the role of the changing physical environment on biogeochemical processes in the Arctic; and on the dynamics of high-latitude lakes and rivers. He has an exceptional ability to originate and launch ground-breaking conceptual ideas and models, such as his formulation of alpha (temperature-stratified) and beta (salinity-stratified) oceans that gives immediate global context to the changing Arctic Ocean. His formulations quickly become the accepted understanding of the larger system.

Recognized as a leader in his field
As a result of his creativity, originality, and influential accomplishments, Eddy Carmack, already an acclaimed leader in Arctic physical oceanography, is now leading the international development of a unifying pan-Arctic perspective of concepts and theories, one that includes Arctic ecosystems and processes in this era of climate change and practical challenges. He is building on his long record of leadership of Arctic cruises and multidisciplinary science teams, including the second-ever expedition to the North Pole (1994 Arctic Ocean Section), the joint USA/Canada surface drift program (1997–1998 Surface Heat Budget of the Arctic Ocean, SHEBA/JOIS), the unique Canada ́s Three Oceans program during the International Polar Year (2007–2008), and the Kitikmeot Sea Science Study (K3S)/Kitikmeoni Imakmiut Ilihauyuhiit (2017–2018) in the Canadian Archipelago. The latter showcases his leadership skills in bridging the gap between scientists and indigenous Arctic communities to help address the central concern of ecosystem and food web dynamics in a rapidly changing environment.

Highlight issues that are of particular relevance to the future development of the Arctic (and put these issues on the national/international agenda)
Future development of the Arctic depends upon our ability to understand how the ocean circulates in the Arctic, interacts with the sea-ice cover and atmosphere, impacts climate and weather at lower latitudes, alters ecosystems, and influences the lives and livelihoods of those who live in the North. In thinking deeply, writing cogently, and speaking clear narratives about the concept of resilience as it applies to all of these issues, Eddy Carmack places each of them front and center on our national and international agendas, while himself epitomizing modesty, openness, curiosity and authenticity in his interactions with citizens, students and scientists alike.