On January 30, the Indian Ambassador, Krishan Kumar, together with UiT Rektor Anne Husebekk and Deputy Mayor Jarle Aarbakke, celebrated peace and friendship by the bust of Mahatma Gandhi at the UiT Campus

2019 celebrates the 150th anniversary for the birth of Mohandas Karamchand Gandhi (1869-1948). To this end, the Indian Embassy wished to garland the bust of Gandhi,  placed in the garden outside the Centre for Peace Studies, on January 30th, the date of Gandhiji’s assassination. The ceremony was followed by a reception, hosted by the CPS, with addresses by the Rektor, the Ambassador, the Vice-Mayor and the Centre Director. 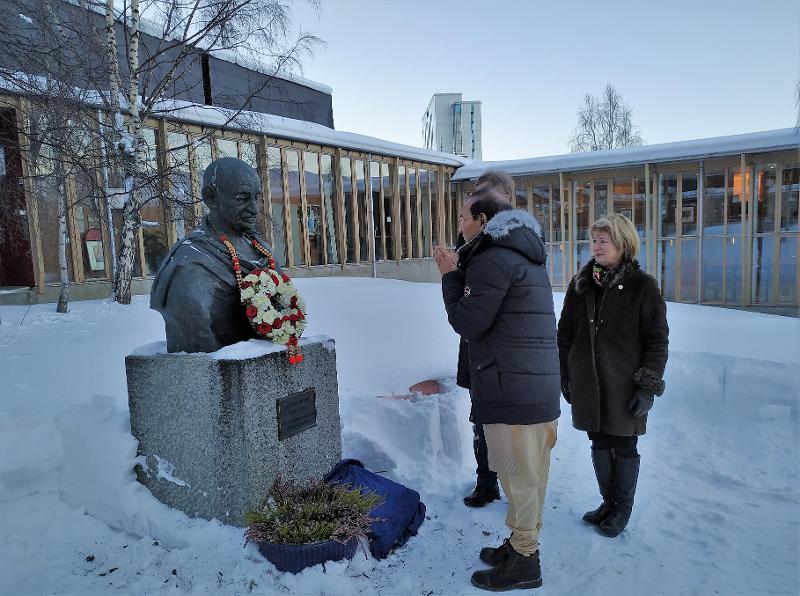 The bust of Mahatma Gandhi was a gift to Tromsø from the City of Poona in 1970, following the signing of their friendship agreement in 1966. It was originally placed in Folkeparken, adjacent to Tromsø Museum, as part of a plan for the park to have a larger collection of monuments. In 2004, however, it was re-installed in the garden outside of the Centre for Peace Studies, an event marked grandly by the Nobel Peace Prize laureate Bishop Desmond Tutu and Gopalkrishna Gandhi, the grandson of Mahatma Gandhi and the then Indian Ambassador to Norway.

This location has since become a place of peace for students, staff, and visiting tourists to enjoy while on the UiT Campus. Inside the Centre for Peace Studies there is a small Gandhi exhibition, open to the public.