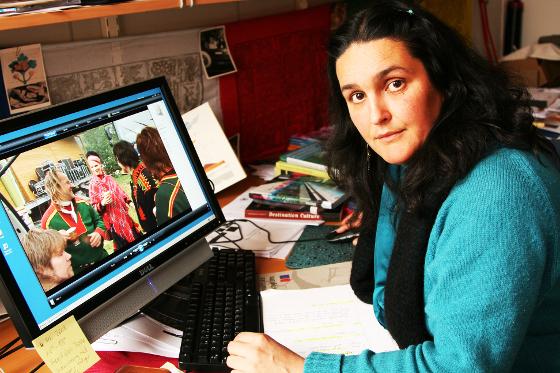 I was formerly junior and then senior lecturer in visual cultural studies and ethnographic filmmaking, at the university of Tromsø, from 1999 to 2007. I am also a professional filmmaker graduated from the Italian National Film Academy, and a film scholar. I was educated in Italy, France, Norway and Ireland, involved in anthropological field research in South and Central Italy, Bolivian Andes, Cuba, France, North of Norway and Ireland, North Cameroon and Norwegian Sápmi (Saami Indigenous People).

Since 2009, I am visiting associate professor at Freie University in Berlin, Visual and Media Anthropology program, Institute of anthropology.

I am also a member of a NFR, Norwegian Research Council, research cluster in museology: MUSVit, the national network of university museums in Norway.

In the museological field I am currently doing research on Mediatization of Intangible Cultural Heritage, innovative/critical concepts of Cultural Heritage and Indigeneity Discourses and Heritage.

In the field of Visual Anthropology I am doing research on how new communities of interest think and shape innovative forms of life, where ecological sustainability and artistic practices co-exist.

Articles and Chapters in Books (published):

__________ “Dwelling between Barn and Kitchen. Phenomenological perspectives in the making of the anthropological film: At Home in the World’’ in Challenging Situatedness: Gender, Culture and the Production of Knowledge. Engelstad, Ericka and Siri Gerrard, (editors). Eburon Press, Delft. Distributed by University of Chicago Press. 2005

Member of the following guilds and associations:

A compulsory class for immigrant children in Paris, the lifestory of five children coming from North and West Africa and China, and the struggles of a strong teacher to help them getting through the French schooling system.

The film was awarded by the Prize of the Jury at the X International Anthropological Film Festival of Nuoro, Italy, 2000 and has been already screened more than 50 times in France and abroad. It was acquired by the Ministère du Livre et de la Lecture in France, and widely distributed in public libraries.

Original dialogue with the very known German philosopher Hans-Georg Gadamer , who was almost 100 years old when the film was made. He evokes topics connected with his work “The Enigma of Health” where he talks about well being, death and moral values. He’s filmed in his everyday life struggles against oldness and decay, far from the ‘golden chair’ of well known dinosaurs of philosophy. Last shooting with him, few months before he died, aged 101 years.

The life portrait of Else Juliussen in Sørøya, Coastal Sami shepherd and “everyday philosopher” in her way. A journey in IIWW memory matched with every day life in a remote fjord in Finnmark. The seasons of the year, her dwelling perspective, the songs she remembers as a form of storytelling, and some of her techniques in the handling of sheep and goats.

Digital anthropological film archive on migrant children’s social relations with peers, life stories and education composing a section of the PhD. Filmed in France and Ireland over 6 years.

The film shot over two years, explores the values, perspectives and abilities of two young Saami yoikers, one from the North and one from the South Sámi areas of Norway.  It documents informal and public “new yoik” performances. Lawra Somby and Sara Marielle Gaup are already well known in Norway, nevertheless they do not seem to rush for easy success. Hence, they keep on trying to learn from their elders and they show they are occupied with history, autobiography and ethnicity. The film explores their attempts of being legitimized both by elders, kin or yoik-teachers as well as by new transnational audiences, which they reach through European distribution abroad. It is a film exploring as well the topic of minority languages and indigenous peoples’ history in Europe.

PhD Scholarship from the Irish Research Council for Humanities and Social Sciences. 2002-2005.

Publication grant for the book “Walking on Uneven Paths”: The Norwegian Research Council, 2009

2004:  University of Rome La Sapienza, Department of Anthropology, faculty of Psychology. Screening and paper on Migration and Childhood within the annual
seminar of Prof. Vincenzo Padiglione.

2003: The visible Evidence" Series of Seminars on Visual and Cultural Studies, Bristol University. Paper "Non nationals" with excerpts of the new work in progress in the panel "Migration and Location". Curator: prof. Michael Shannan.

2003: Bilan du Film Ethnographique, Paris. Screening out competition of "At home in the World".

2003: Festival of Visual Culture, Petrozavodsk, Russia, and Joensuu Finland: screening of "At home in the world" with Russian Subtitles. Director: Dr. Pekka Silvoinnen.

2002 “Challenging Situatedness: Gender, Culture and the Production  of Knowledge”,  conference by The Norwegian Research Council. Paper: “Dwelling with camera in between the female spaces of barn and kitchen” and screening of the film “Else at home in the world”.

2001 National Saami Parliament: presentation of a selection of research projects: “Else hjemme I verden”, screening and debate, Karasjok, Norway

2001 University of Arkangelsk, Russia. Screening of “Else Hjemme I verden” and “The Enigma of Health”, presentation: “The wise patient: a multidisciplinary research project”.

2001 Heidelberg, screening of “The Enigma of Health” in presence of Hans-Georg Gadamer, debate and discussions around his portrait. Convenor: Emeritus Prof. H.G. Gadamer.

2001 University of Tromsø, Institute of Medicine. Several screenings of “The Enigma of Health” and debates. Convenor: prof. Eivind Merok.

2001 Senter for visuelle kulturstudier,  Celebration for the establishment of the permanent department of Visual and Cultural Studies at university of Tromsø. Paper.

2001 University of Stockholm: Screening of “The Enigma of Health” and debate.

2000 Bergen Philosophical Poliklinik: Screening of “Else hjemme i verden”.

2000 Tromsø International Peace Conference organized by Unesco: Screening of “Else hjemme i verden” and paper: “Visual Studies for Peace purposes”.

2000 Paarnu Interantional Documentary and Anthropological Film Festival,  Estonia, screening “Else at home in the world”.

2000 More than 20 screenings of “Else Hjemme i Verden” in Institutions, Hospitals, Schools, Academies, universities.

2000 Tromsø International Litterature Conference “The Heritage of Laestadius”, opening night, screening of “Else hjemme i Verden” and paper: “Mystical and sensual: women’s faith and ecology”.

Philosophical Poliklinik, Annual Conference, Bergen : “Else at Home in the world”, screening and paper.

1999 Tromsø International Womens World Conference: screening of “Else at home in the world”.

Anthropos Programme, University of Ngaoundéré and Tromsø: fieldwork in Cameroon.(1994-1997)

Visual Anthropology: assistant researcher of Professor Lisbet Holtedahl in the making of the documentary film “A Castle in Africa”, 3 hours, 2004. Fieldwork in Cameroon, Nigeria and France (1997-2001).

MusVIt: Research Project on Materiality, Expertise and Mediation of Knowledge in the Norwegian University Museums. 2009-2015.

1990. Short documentary in observational participatory style  of the work of wood-etching in Tuscany.

1991. Docu-fiction, the undergrounds of Naples, its inhabitants and hidden practices of life, historical reconstructions, secret loci.

1993. The ritual of Fertility in the feast of Tinku, Bolivian Andes, where warriors simulate war through individual fights, often leaving one of them dead. Event filmed during preparation and actual ritual in two communities of the Macha area in the Andes, Quechua speaking areas.

1996. The last monologue of the actor Antonio Neiwiller, mythical performer and poet dead in 1994 in Naples. A film on theatrical experimental practice and anthropology of performance.

Shown at the Venice Festival in 1997, Biennale di Venezia.

1998. Performance and body language through the work-shop of Living Theatre led by Neiwiller with a group of international actors.