Last year, on October 14, 2015, a member of the CLEAR group, our own Aleksandrs Berdicevskis presented an invited plenary talk titled "Explanatory approaches to linguistic complexity: calculations, models, experiments" at the 3rd Conference in General, Nordic and Slavic Linguistics for graduate and doctoral students, which took place in Moscow, Russia. Today you can watch the whole recording of his talk at https://www.youtube.com/watch?v=tlZqoFwNLxg 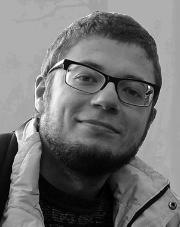 The last conference of the year 2015 attended by CLEAR is the 14th annual conference of the Slavic Cognitive Linguistics Association held at the Universities of Sheffield and Oxford (UK) on December 9-13, where six members of CLEAR presented seven talks including a featured presentation on TROLLing (http://opendata.uit.no/). See the happy faces below.

Today, on the 17th of December of 2015 we received great news from our own Francis Tyers, a member of CLEAR group at UiT, who just received a grant from the European Association of Machine Translation for holding a Summer School on Rule-Based Machine Translation. The school will take place over a period of two weeks in the summer of 2016 at the Universitat d’Alacant. More information is coming soon! Congratulations, Fran!!! 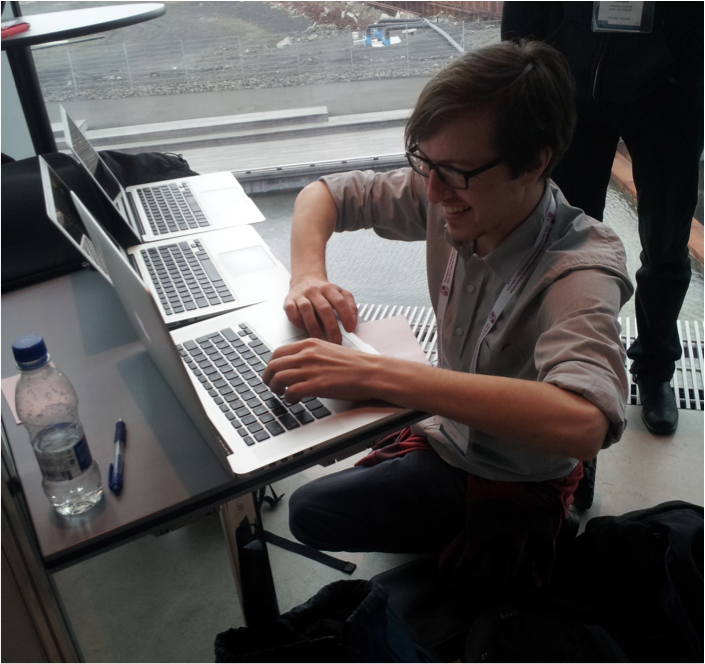 Time machines do not exist, but books are good substitutes. Tore Nesset's new book that just came out in September 2015 takes you two thousand years back in time and explains how the Russian language came to be the way it is by reviewing all major changes in the grammar and sound system. The book is now available on Slavica Publishers: https://slavica.indiana.edu/bookListings/linguistics/How_Russian_Came_to_Be_the_Way_It_Is. 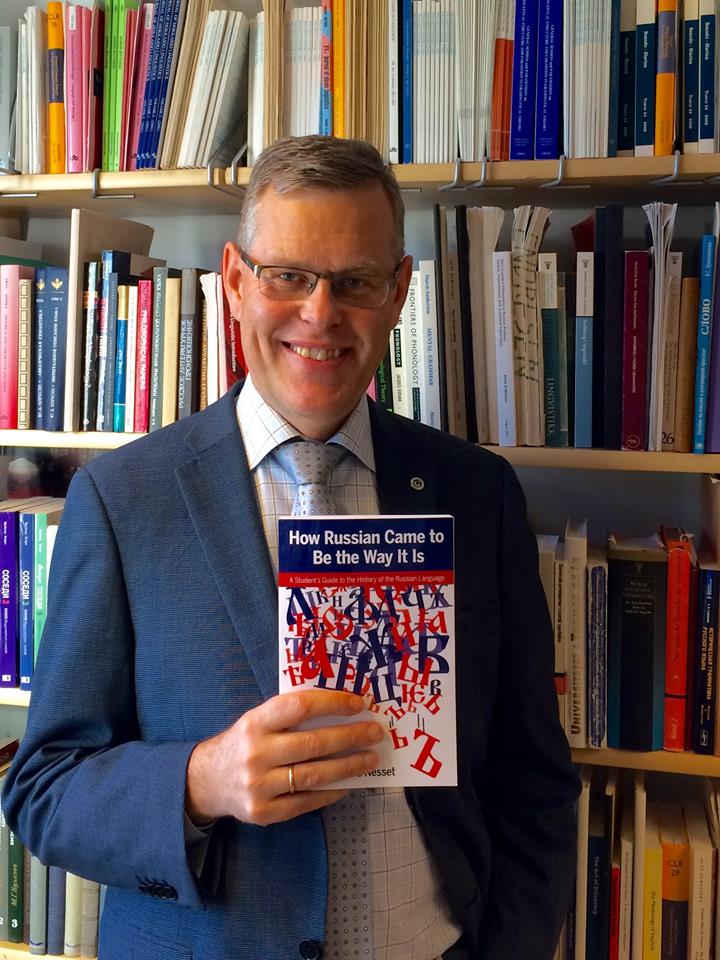 We are happy to announce that a member of the CLEAR group, Julia Kuznetsova, published a book entitled “Linguistic profiles: Going from Form to Meaning via Statistics”. The book came out at DE GRUYTER MOUTON in August, 2015. Read more about this book at http://www.degruyter.com/view/product/428969

Pictured: Julia Kuznetsova
CLEAR had a fantastic start to the new semester! The day after a productive and highly inspirational group meeting held on August 26, CLEAR attended a musical concert "Grieg & Mendelssohn ut på tur" performed by the virtuosic Nordnorsk Opera og Symfoniorkester. Here we are, in the woods in front of Skihytta, in one of the most picturesque places in Tromsø.

On August 19, 2015, four members of our research group presented five papers at the 5th Conference of the Scandinavian Association for Language and Cognition (SALC V) organised by NTNU, the Norwegian University of Science and Technology, and held in a beautiful place near Trondheim.

They send warm regards to three other members of CLEAR, Francis Tyers, Robert Reynolds, and Olga Lyashevskaya, who co-authored two of these papers. 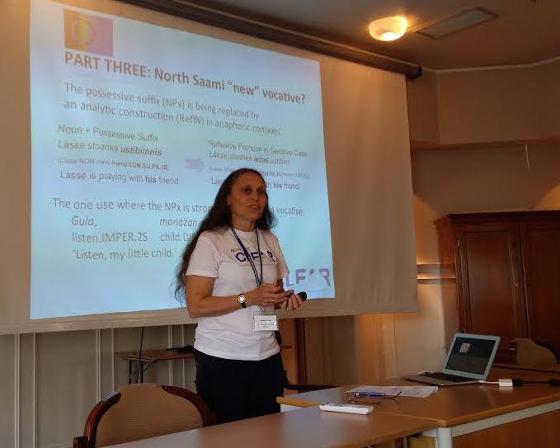 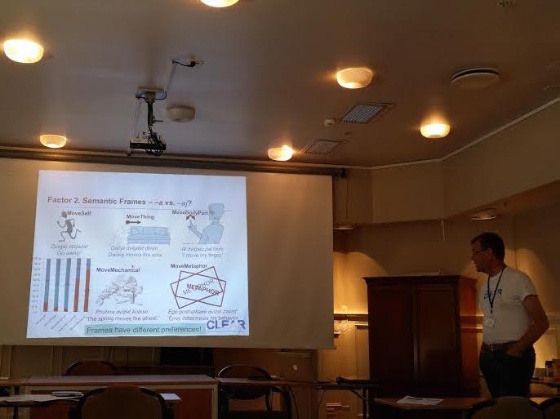 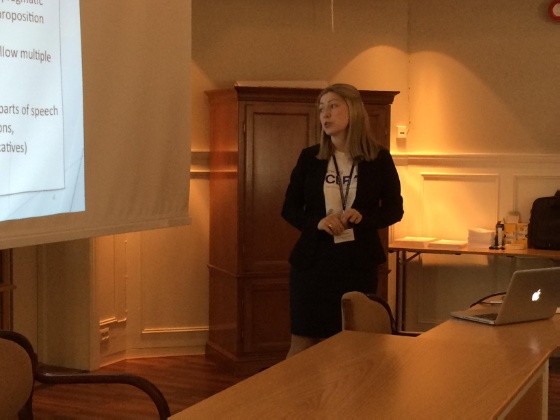 On July 20-25, 2015, eight members of the CLEAR research group presented twelve papers at the International Cognitive Linguistics Conference in Newcastle, UK. Here they are, all wearing TROLLing t-shirts.

Starting from July 2015, the CLEAR group has a new member, Maria Nordrum, who recently submitted her Master’s thesis titled “Disentangling путать: An empirical analysis of one verb with prefix variation”. The thesis is  available at http://munin.uit.no/handle/10037/7947 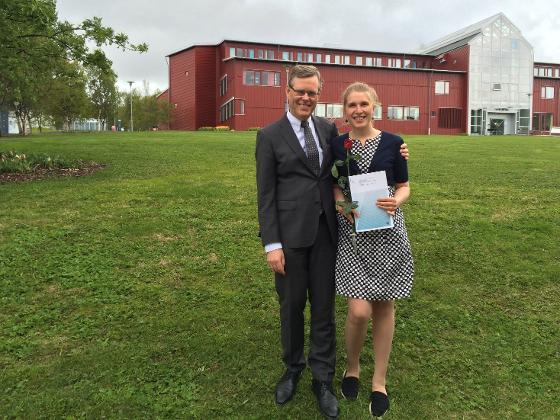 On April 21-22, 2015, the CLEAR group organized a conference “Slavic Corpus Linguistics: The Historical Dimension”. For the programme, handouts and presentations see the conference site at http://site.uit.no/slavhistcorp/

On April 21, 2015, a member of CLEAR, Hanne Eckhoff, held a launch of TOROT, the Tromsø Old Russian and OCS Treebank, available at https://nestor.uit.no/users/sign_in. See the ppt from this event at http://site.uit.no/slavhistcorp/files/2015/04/Eckhoff.pdf

A member of the CLEAR group, Anna Endresen, has defended her doctoral dissertation titled “Non-Standard Allomorphy in Russian Prefixes: Corpus, Experimental, and Statistical Exploration” on January 16, 2015. The dissertation is now available at http://munin.uit.no/handle/10037/7098

On September 19-20, 2014, the CLEAR group participated in Forskningsdagene in Tromsø, presenting our research to the local public.

One of the members of the CLEAR group, Anastasia Makarova, has defended her dissertation titled "Rethinking diminutives: a case study of Russian verbs" on August 26, 2014. Read more about this dissertation at https://uit.no/nyheter/artikkel?p_document_id=385723&p_dim=88147 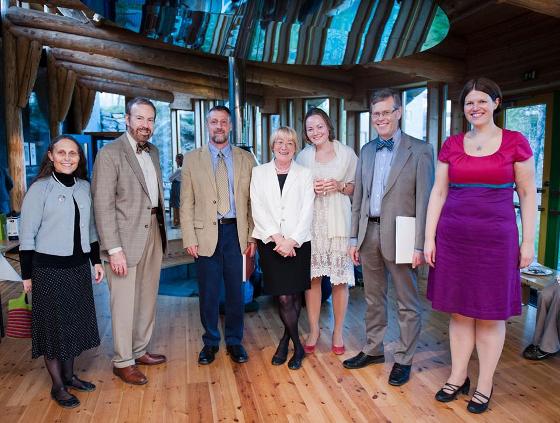 One of the members of the CLEAR group, Julia Kuznetsova, has defended her dissertation titled "Linguistic Profiles: Correlations between Form and Meaning" on May 6, 2013. 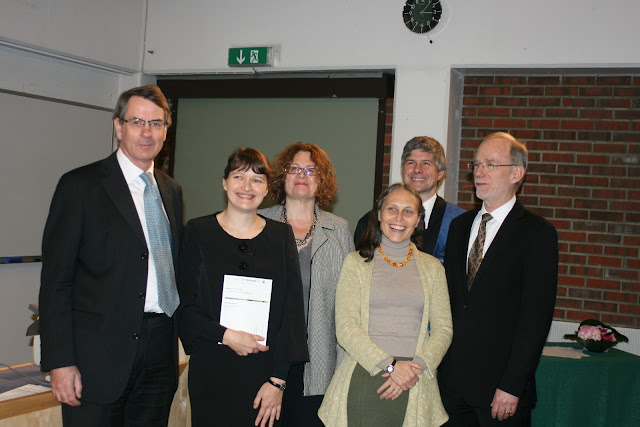 On February 22, 2013 the CLEAR group organized a conference "Cognitive Linguistics in the Triangle: Slavic and Beyond" (see the program). Several photos from the conference:

Our book "Why Russian aspectual prefixes aren’t empty: prefixes as verb classifiers" has been published by Slavica. The website accompanying the book is available at the University of Tromsø's website. See the book announcement. 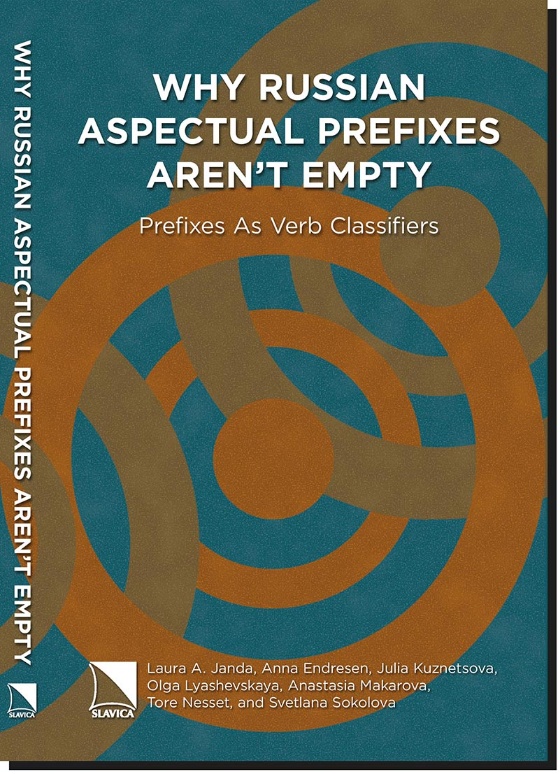 One of the members of the CLEAR group, Svetlana Sokolova, has defended her dissertation tittled «Asymmetries in Linguistic Construal.  Russian Prefixes and the Locative Alternation» on September 24, 2012.

One of the CLEAR group leaders Laura Janda has been awarded the 2011 research prize from the Faculty of Humanities, Social Sciences and Education at the University of Tromsø. Janda was nominated jointly by CASTL and the Departement of Language and Linguistic; see here for an excerpt of the nomination letter. Congratulations!

In the year 2011/2012 Laura A. Janda and Tore Nesset were group leaders of the Research group "Time is Space: Unconscious Models and Conscious Acts" at the Centre for Advanced Study in Oslo.

Exploring Emptiness: A database for learners and teachers of Russian Blog by Laura Janda

Opening of the "Exploring Emptiness database"

What can Russian verbs tell ut about gender stereotypes? Blog by Julia Kuznetsova

The Issues of Variation: Are there "Empty" Prefixes in Russian? Blog by Svetlana Sokolova