Dr. Jan Magne Gjerde participated in a National Geographic programme, where he contributed with interpretations on the rock art in Alta.

For details see news item at NIKU and a trailer for the programme.

Dr. Carol Lentfer returned to Tromsø and continued her analyses of Stone Age slateknives. A lot of people and institutions have assited us in this. Warm thanks are due to:

Dr. Jan Magne Gjerde (NIKU) for procuring slate and other raw material for the experiements; Professor Gørill Nilsen (AHR, UiT) for procuring seal skin and blubber; Stine Bendicte Sveen (Samediggi) for fresh reindeer skin; Professor Karl Frafjord, taxidermist Håkon Dahlen and  Silje Gaupseth (all UM, UiT), Professor Frank Narve Rosell and senior engineer Frode Bergan, (both University of South-Eastern Norway) for hair samples from a variety of mammals; Morten Kutschera for valuable information on slate tool production; Tanja Larsen for help in the collection at the Arctic University Museum (UM); Ass. professor Per Persson and Dr. Hanne Lovise Aannestad for assistance at the Cultural Museum at UiO; senior engineer Eirik Rindal and the Natural History Museum in Oslo for providing work space and access to microscopes; Johan Eilertsen Arntzen  (AHR, UiT) for technical assistance; and last, but not least,  Warwick Anderson and Jenny Freeman for assistance with the experiments and many other tasks in the process.

Kenneth Webb Berg Vollan, Marianne Skandfer and Signe Groot Terkelsen excavated two trenches in a Stone Age dwelling at Risvåg, Hasvik municipality. The dwelling was excavated by Povl Simonsen in 1963, but the team placed trenches through remaining part of the wall and floor, in order to examine possible evidence for several phases of habitation in the dwelling.

Marianne Skandfer, Jan Magne Gjerde and Charlotte Damm surveyed at Fella, Vatnan and Gåshopen in Sørøysund with the assistance of Statens Naturoppsyn. Fella had hardly been surveyed previously, but Kenneth Web Vollan had through examination of Lidar data discovered what looked like several sties with Stone Age dwellings. In the course of just one day we were able to confirm his observations and recorded 80 new structured at Fella.

While both Vatnan and Gåshopen had been surveyed previously, again Lidar examination had revealed the likelihood of several new clusters of dwellings. We were able to confirm most of these, in addition to georeferencing most previously known structures.

On june 6th Stone Age Demographics held a one day seminar at Alta. first we secured an impression of the Alta-fjord area from the sea though a round trip in boat with Statens Naturoppsyn. The rest of the day was reserved for paper presentations and discussion.

Fieldwork at various areas in the Altafjord-region.
Responsible coordinator and researcher Jan Magne Gjerde was joined by several colleguages for different  parts of the fieldwork. The focus was investigation the extent and intensity of habitation and raw material exploitation in inner parts of the fjord.  Gjerde and Bryan Hood surveyed near Kvalsund for potential raw material sources. Extensive sampling through test pitting was performed at St. Korsnes (Gjerde assisted first by  Hood and also Ingvild Skau (the latter from Alta Museum), and later by Peter Jordan and Eirik Haug Røe from Groningen. Jordan also participated at the survey at Hakkstabben, where close to 60 dwellings from the Stone Age were recorded. Damm assisted Gjerde with surveys at Svartskog/Altneset, Inner Kåfjord, spots along the Alta river and at Djupvik.

Charlotte Damm organised and lead a PhD-course with the title "Population dynamics" within the The Nordic Graduate School in Archaeology – Dialogues with the Past. The course was hosted by the Norwegian Institute in Rome. 8 PhD-students participated, including Stone Age Demographis own Erlend Kirkeng Jørgensen and Roberta Gordaoff. Other lecturers were Prof. Kerstin Lidén, Stockholm University; Prof. Ian Armit, Leicester University and Dr. Marc Vander Linden, cambrdige University.

A midway-seminar was organised for PhD-student Kenneth Web Vollan. Members of the committee were Profs. Bjarne Grønnow from the National Museum at Copenhagen, Denmark and Bjørnar Olsen, UiT.

Jan Magne Gjerde interviewed Gunnar Iversen from Årøya in Alta. Iversen has over a long period documented historical fishing places and meyds in the Alta-fjord region from local fishermen. The meyds (mea) mark fishing grounds or fishing spots by basic triangulation to specific landmarks.  Iversens information on the meyds includes fish species, seasonality and fishing methods. The mapping of meyds reveals that many of these landmarks with distinct landscape features cannot be discerned from maps but has to be seen from the sea. This may reveal more about the landscapes and seascapes and provide alternative ways of understanding space and place based on traditional geographic knowledge.

Charlotte Damm was invited to present at the International Symposium Jomon Transitions in Comparative Context:  complexity, materiality, ritual and demography among prehistoric complex foragers and early famers in Japan and Europe in Cambridge, UK. Damm's paper was entitled "Demographic patterns amongst Hunter-fishers in Northernmost Europe 5500-1500 BC" 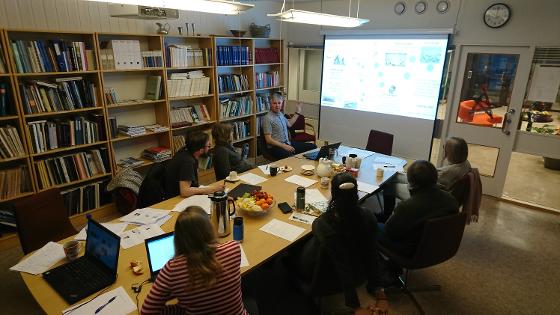