Marianne Skandfer gave an open popular lecture in Tromsø city centre of some of the project's results, under the heading: "Were there 'Good Old Days' in the Stone Age?". The presentation reflected upon collective memory, the role of materiality/things in remembering, and under what kind of social and political circumstances history matters.

Jan Magne Gjerde was invited by Ulsan Petroglyph Museum and Ulsan Museum to South Korea to present the rock art of Alta at the international conference Whale on the rock II, in Ulsan, South Korea. Gjerde presented a paper on the marine mammals in Alta rock art. The paper is published in Korean and English. Adding to this a second paper by Gjerde was published in Korean and English. This is an overview paper on Stone Age rock art in Fennoscandia.

Jan Magne Gjerde participated with a presentation on Maritime mobility and geographical information in Stone Age Rock Art based on studies of rock art and seascapes in northern Europe with particular focus on the Altafjord-region at the session Markers and Mobilities: Interpreting dynamic landscapes the 5th International Landscape Archaeology Conference (LAC 2018) at the McCord Centre for Landscape at Newcastle University in Durham and Newcastle, England. 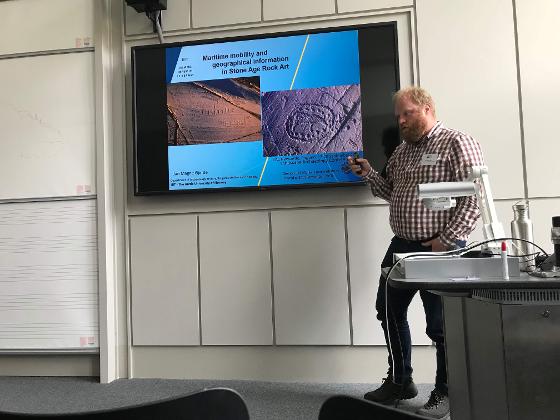 Jan Magne Gjerde co-chaired two sessions at the 20th International Rock Art Congress (IFRAO 2018) in ValCamonica, Darfo Boario Terme (BS), Italy. The sessions were : Rock art and World Heritage with Sally K. May and Paul S.C. Taçon and  A northerners view on rock art. Aspects, mobility and materiality on the Scandinavian Rock Art with Heidrun Stebergløkken. At the conference Gjerde presented 3 papers: A northerner’s view on rock art - revisiting a century of “Scandinavian rock art traditions”, Crossing borders and boundaries - an overview of the study of the “monumental rock art of northern Europe from the Stone Age” and More than 30 years of Rock art and World Heritage in Alta, Northern Norway. 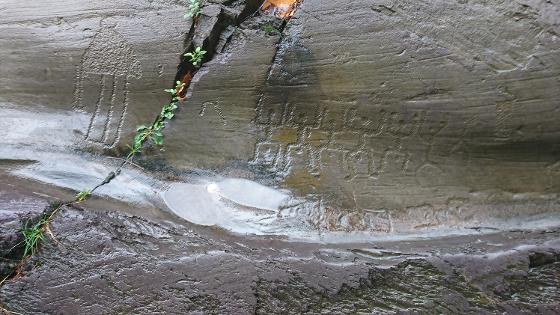 Roberta Gordaoff and Charlotte Damm returned to several of the sites visited in June to expand on the previous recording. These included Kårvik on Seiland and Slettnes. In addition they recorded new sites (discovered by Kenneth Web Vollan through Lidar images) near Kårhamn on Seiland.

Northern half of Slettnes, and view towards Hammerfest Foto: Charlotte Damm

Dr. Carol Lentfer has for 3 months been performing experiments with slate knife edges, assisted by Warwick Andersson. She is now comparing the patterns to a number of Stonr Age knives. This study is a follow-up on her initial visit in April 2017, aiming to produce a pioneer study of use-wear and residues on the northern prehistoric slate knives. Inital results are highly promising!

Marianne Skandfer, Kenneth Web Vollan and Charlotte Damm surveyed in northern parts of the Sørøysund basin. Bad weather hindered a visit to Sandbukt, but they visited Slettnes and re-recorded all dwellings there. They also visited sites on the northern part of Seiland, In addition to recording previously known sites, Marianne Skandfer found a large Mesolithic sites in the area.

Jan Magne Gjerde has conducted extensive surveys on the SE and SW part of Seiland and in adjacent areas of the basin in the central part of the Alta fjord. While several new sites were discovered, the general picture of clusters with settlements and areas with few sites has been confirmed. He was accompanied for one week by Bjørn Ramberg and for 3 days by Bryan Hood. Hood and Gjerde visited a number of potential quarry sites (chert and slate).

Jan Magne Gjerde sailed north from Alta and around the island of Seiland, in order to evaluate the topograpical potential for new settlement sites. As the sea was rather rough, he was unfortunately not able to a ashore as much as we had hoped for. Still, he was able to determine that large section would have been inaccessible also in the Stone Age, thus limiting the areas that need to be surveyed.

April 10th 2018
Many of the Stone Age Demographics participants joined in a safety in small boats-course: 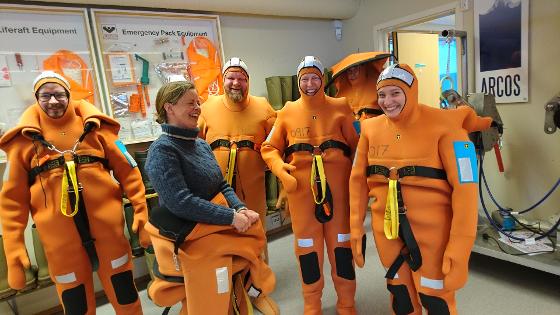 Prof. Knut Andreas Bergsvik joined us for a full day seminar on field work practices, and strategies, in preparation for this summers activities.