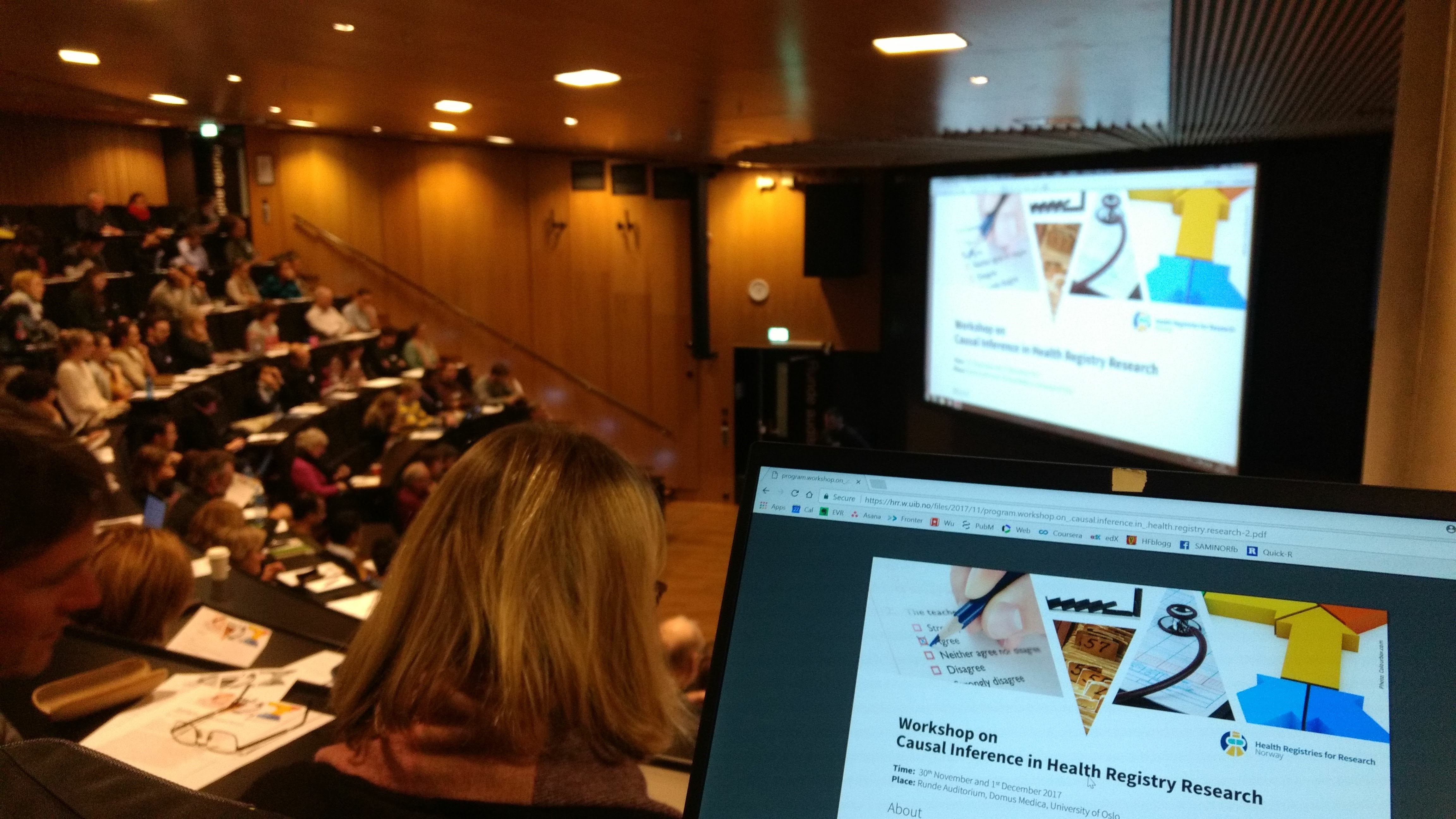 I attended the workshop on causal inference in health registry research at the University of Oslo in the end of November. The workshop ran over two half full days, such that participants from other cities easily could fly in to Oslo the first day and out of Oslo the second day. There were some changes in the program, but the main themes were as proposed; time-varying confounding, IVA, multiple mediation analysis.

As I am early in my first PhD year, I found this to be quite complex topics. However, I prepared by taking a course on causal inference and DAGs online. This was just an introductory course, however, and I later learned that other PhD students had attended a week course on DAG theory just before this workshop – in retrospect I should have thought of that possibility myself.

That said, the lecturers were quite good and managed to break down the essence of the methods in a pedagogic manner, such that rookies as myself could understand it. I find that to be an essential quality in a lecturer and I appreciated that a lot. There was partly an active dialogue between lecturer and audience, so there was no feeling of attending an old school, monotone monologue.

To conclude, would I recommend this course? Yes, given that you have some background knowledge in the field. Logistics were otherwise impeccable; we got lunch and snacks, and coffee and tea were always available.

I attended the course ‘New statistical methods for causal inference’ and the workshop ‘Causal Inference in Health Registry Research’ at the University of Oslo, November 2017. The course was mainly concerned with causal graphs (DAGs), inversed probability weighting, mediation analysis and collapsibility. Being new to the causal modeling, I appreciated how the lecturers presented the topic in an understandable and interesting way.

The workshop was held a week after the course finished. For me, the workshop functioned as an extension of the course, and it would be hard to keep up without any previous knowledge. While going through many of the subjects from the course, the lectures expanded on g-methods, instrumental variables and mediation analysis with multiple mediators.

I think I had a good learning outcome from the course and workshop. It provided me with tools important to the variable selection process, separating direct and indirect effects, and analysis of bias. I would recommend the course to anyone who wants to improve the quality of their analyses, or just have a general interest of learning more about statistics.

My supervisor suggested me to attend this workshop and I found the workshop quite interesting and informative. The course was bit advance therefore basic understanding of statistical methods is required. I suggest this workshop, if someone is aiming causal analysis or interested in this. It was also a opportunity for me to meet researchers across Norwegian institutions.