The Toxin-Antitoxin system is one of the three primitive defense mechanisms found in bacteria against viral or phage DNA/RNA. When the bacterial cell encounters stressful conditions, the antitoxin is often selectively degraded. This allows the toxin to exhibit its activity leading to growth arrest, dormancy or suicide to save the rest of the colony.Bacteria and archaea use unique classes of defense mechanism against viral or other foreign DNA. Examples include passive resistance based on variation of virus receptors and active defense such as immunity, dormancy induction and programmed cell death. Unlike passive resistance, functional active immunity systems depend on the ability to distinguish the genomes of invaders from the host genome and incapacitating the intruder DNA. The best-characterized innate immunity systems are the extremely numerous and diverse restriction-modification (RM) modules that employ methylation to the host genomic DNA, protecting it, while the restriction enzyme cleaves any unmodified foreign DNA indiscriminately. The adaptive immunity systems in bacteria are represented by the CRISPR/CAS system (clustered regularly interspaced short palindromic repeats/CRISPR-associated genes), incorporating pieces of foreign genetic information into the host genome and attacking invaders specifically upon new encounters using the cognate guide RNAs. An additional major type of active defense system through induction of dormancy or programmed cell death in response to infection is represented by the numerous and enormously diverse toxin-antitoxin (TA) systems. In this type of defense, infection disrupts the balance between toxin and antitoxin, resulting in activation of the toxin that leads to the abrogation of central cellular functions. Genes for toxin-antitoxin (TA) complexes are widely disseminated in bacteria, including in pathogenic and antibiotic-resistant species. 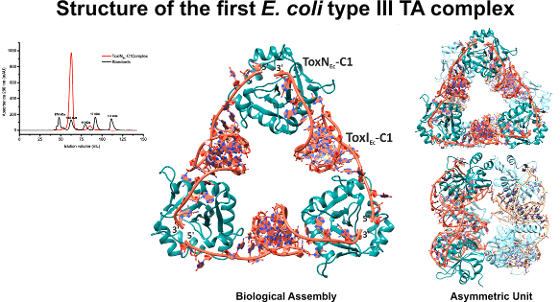