The SAMINOR 1 Survey was conducted in 2003–2004 in collaboration between the Centre for Sami Health Research (CSHR) and the National Health Screening Service, which was later incorporated into the Norwegian Institute of Public Health (NIPH). SAMINOR 1 was conducted in parallel with a regional health survey (TROFINN) organised by the Norwegian Institute of Public Health.

Apart from Alta, all municipalities had fewer than 3000 inhabitants. 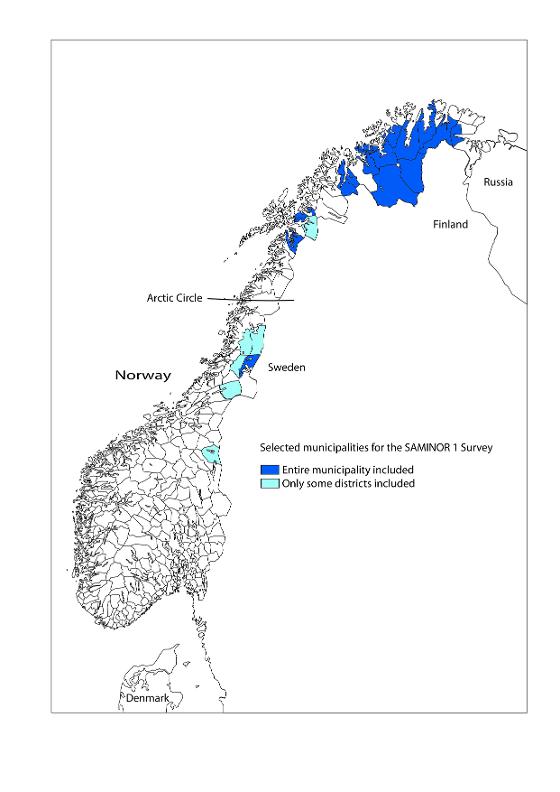 The numbers of participants referred to here are those who answered at least one questionnaire and/or took part in the clinical examination and who did not refuse consent for the use of their data in medical research.

Implementation of the Survey

When the survey began in Nesseby, a two-page questionnaire (Questionnaire 0) compiled by the CSHR was sent to selected age groups, with an invitation letter and an information brochure. Those invited could choose between only the questionnaire or the questionnaire and the clinical examination. The completed questionnaires were returned to the Department of Community Medicine at the University of Tromsø.

Those who wished to participate in the clinical examination subsequently received an invitation indicating the time and place. The invitation was sent out with a three-page questionnaire from the Norwegian Institute of Public Health (also in Sami). Completed questionnaires were handed to staff at the appointment for the clinical examination. The examinations took place in two health buses parked at one or more places in the municipality.

After the clinical part of the health survey, participants were asked to complete a four-page supplementary questionnaire (also in Sami and English) from the CSHR and return this to the University of Tromsø.

UiT The Arctic University of Norway is Data Controller

Further details of the SAMINOR 1 Survey are described in:

Design 1 was used in Nesseby, Tana, Karasjok and Kautokeino. Design 2 was used in the remaining municipalities.

For researchers: All questionnaires (Norwegian), including names and coding of variables