Queen Silvia thinks the Molecules for the future project is exciting! 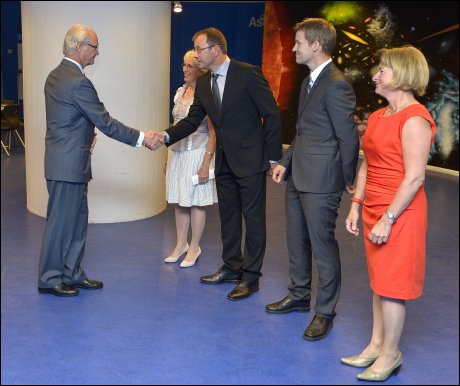 The Swedish King and Queen are on a two-day visit to Northern-Norway to learn about the high north visions and strategies.

Among the activities on their program in Harstad and Tromsø was a seminar given by the MARZymes co-leader Prof. Nils Peder Willassen at University of Tromsø. The recently awarded Prof. Fredrik Alqvist was invited to introduce the Umeå part of the project.

After listning to the introduction, the Swedish Queen said, - This is exciting.

The Queen also wanted to know how far we have come in the process of using the Arctic derived bacteria in medical achivements. Although Prof. Willassen kept some secrets due to patenting issues, he revealed that several enzymes are in the stage of being tested for commercialization. (Photo copyright: vg.no). 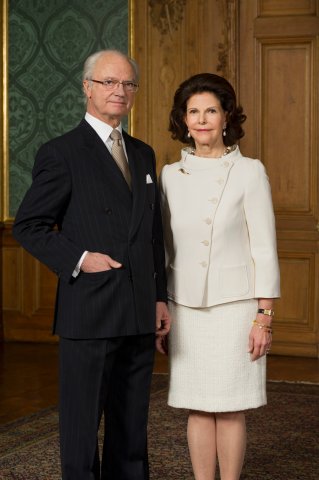 The MARZymes project, which is a Swedish and Norwegian cooperation, will be presented to our countries Kings and Queens during their visit to Tromsø 18.-19. June 2013. 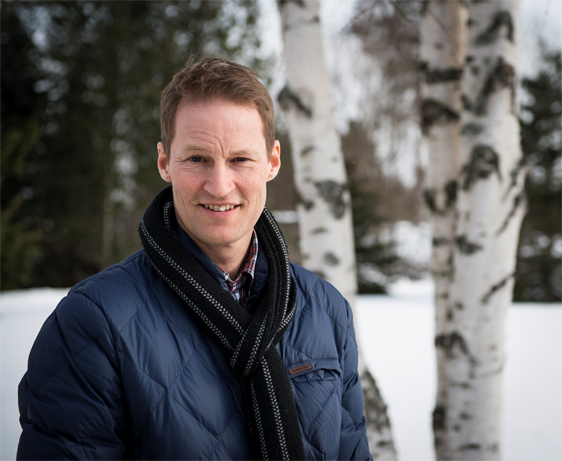 Professor Almqvist at Umeå University received the prestigous award "Göran Gustafsson priset" for his work on combating disease-related bacteria: "for his work on development of new organic substances that can be used as tools in the fight against bacterial infections and amyloid diseases". In our project "Molecules for the future", Almqvist and colleages tries to find new antibacterial substances from organisms at the Norwegian Sea. Read more about it here (in Swedish).

The cold-adapted Rhodococcus sp. strain AW25M09 was isolated from an Atlantic hagfish caught off the shore of northern Norway as part of an ongoing bioprospecting project that aims to identify novel bacteria with biotechnological potential. Here, we present the 5.8-Mb draft genome sequence, together with details regarding the origin of the strain and its sequence assembly. Read more here.

"They are tiny, they are tough, and they can survive winters in the Arctic Ocean"

MARZymes was recently presented at forskning.no with an article on the bacteria from the Arctic and how the genetic information they hold is analysed and used for industrial purposes. You can read the Norwegian version here. An English translation was also published at Science Nordic, read it here.

"Life in Tromsø is more extreme"

"Wild hunt for bacterias. The Swedes dreams of finding something that destroys multiresistant bacterias. The Norwegians are hunting for the perfect, energy saving washing powder. Together they hope to reach their goals by prospecting in the ice cold sea in the North of Norway and around Svalbard." 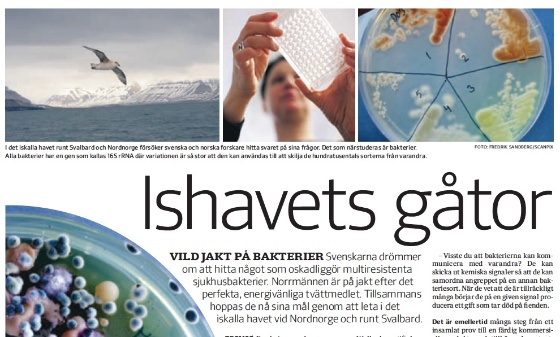 The MARZymes project was well covered in the Swedish newspaper, Svenska Dagbladet some weeks ago. On the front page and two full pages inside the Buisniss and Trade section, "SvD Näringsliv", prof. Nils Peder Willassen reported, – What if we could find a enzyme that could be used as a detergent in washing powder so that our clothes could be washed at only 10-15 degrees celcius? Imaging how energy saving that would be!

"It is all about green chemistry, to replace petrol with biological products and make energy-dependent processes less demanding", says researcher Nils Peder Willassen at UiT. More on this news.

Last week all partners, from Tromsø, Umeå and Trondheim, met for a one-day intensive meeting on the "Molecules for the future" project. This project is a Swedish-Norwegian collaboration, with partners at three nodes; University of Umeå, Norwegian University of Science and Technology (NTNU) and University of Tromsø (UiT).

The Tromsø node, termed MARZymes, is in charge of the bioprospecting where they harvest samples from the biota, sea sediments and sea water.  prepare bacterial isolates. Microoorganisms that live in such challenging environments as the extreme cold and variable light of the Arctic can be an i

mportant source of unique natural compounds. Isolates found  here are then prepared and sent to the The Laboratories for Chemical Biology Umeå (LCBU), Sweden, for larger scale culture, functional screening and characterization. The Swedish node of the projects aims to construct a natural product compound library based on the unique microbial flora in the Arctic. LCBU are home to a high throughput screening platform directed towards the study of infectious diseases. Novel compounds from Arctic marine microorganisms are of great interest for studying mechanisms of action and developing new drugs to combat infectious diseases.

The Tromsø lab is mainly focusing on the development of metagenomic libraries and search for marine enzymes (thus, MARzymes). The main interest is here to study the genomic DNA of both cultivable and uncultivable microorganisms. By in silico screening and by functional screening of the gene sequences we have identified candidate cold-adapted enzymes. Targets are being produced recombinantly in E. coli and other host systems, and will be characterized functionally and structurally. So far, our focus has been put on enzyme activities that are relevant for applications in biotechnology and food industry, and for the development and processing of biofuels.

In Trondheim, basic problems of cold-adapted host expression systems has been addressed. The group here is studying replication and copy number control and by developing vectors based on t

he broad-host-range plasmid RK2 replicon. They develop suitable vectors for recombinant expression of cold-adapted enzymes and vectors for library preparation, for library screening and shuffling.

During the annual meeting the Swedish lab presented their proof of concept of their screening methodology in the infectious disease area. The Tromsø node presented the overall project status and some examples of enzymes that are being characterized in the lab. The Trondheim group presented work on the development of the about-to-be-finished cold-adapted host expression system, and library vectors and shuffling vectors.

MARZymes goes to shore again to collect samples from the Arctic. This shows some of the interesting species we found on the last cruise. Since the last cruise F/F Jan Mayen has become F/F Helmer Hanssen and is owned by the University of Tromsø. The re-baptism happened June 17, 2011. On this date, in 1903 - 108 years ago - Helmer Hanssen started his first great expedition with Roald Amundse 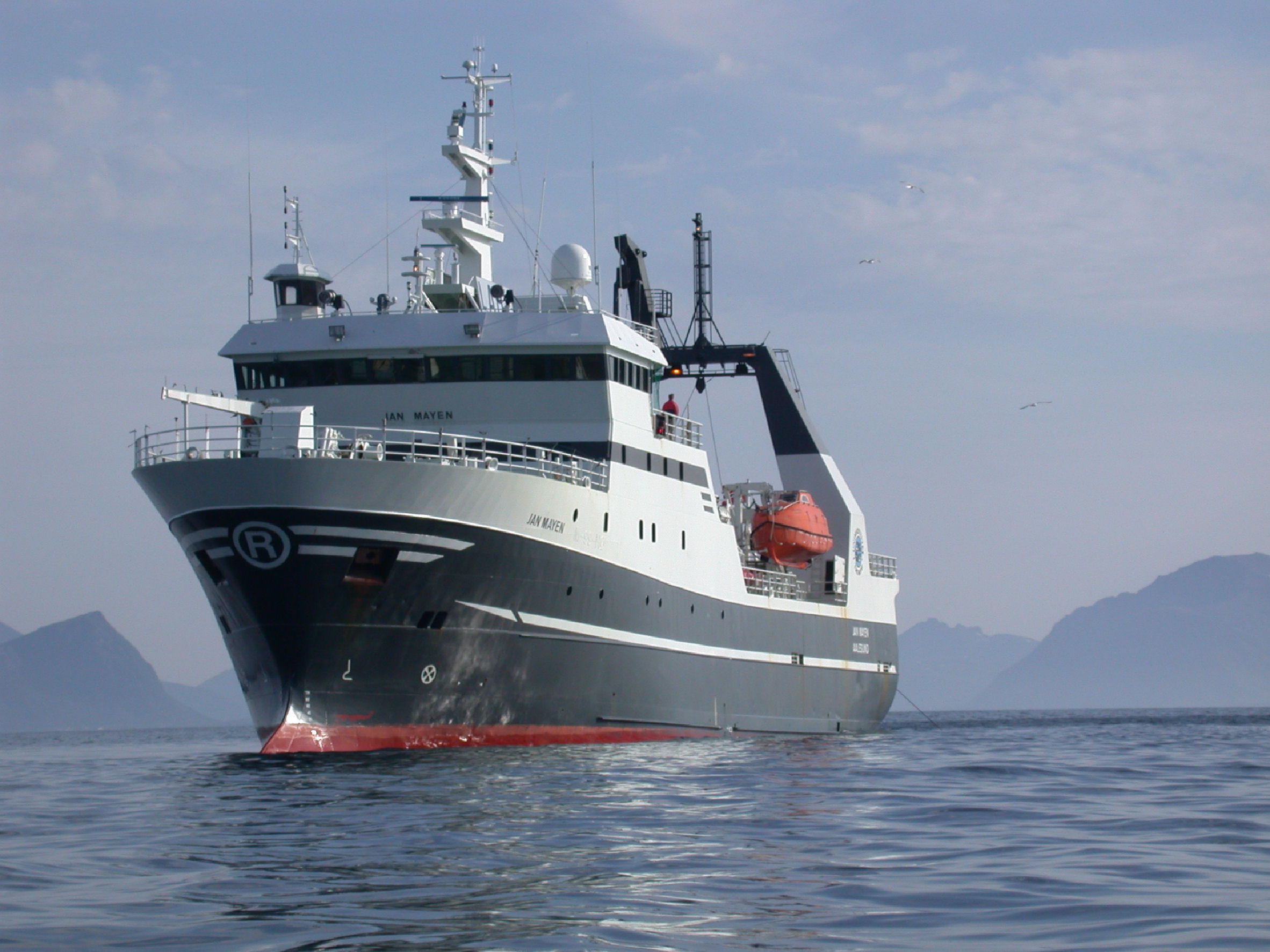 n on the ship Gjøa to search the Northwest Passage. Helmer Hanssen (1870–1956) was a Norwegian polar explorer, and one of the first five to reach the South Pole on the expedition of Roald Amundsen. And this year, in December, it is 100 years since Hanssen reach the South Pole (facts from Wikipedia). What a great year to join a cruise! 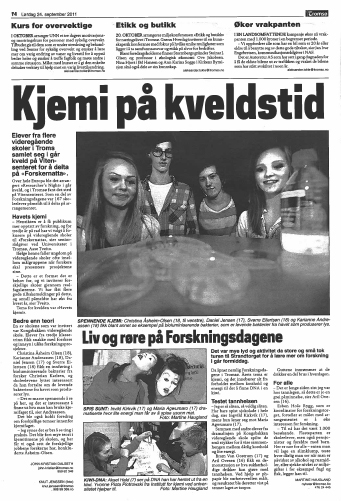 Chemistry in the sea was topic for this years' Researchers' Night at the Science Centre in Tromsø. High school teens from all over Troms were invited to join the newly opened Science Centre, for seminars and stands where they could do simple experiments. MARZymers had a stands to teach the student bioprospecting. They could digg in the sediments, see fluroescent bacteria growing in cultures, run electrophoresis and puzzle GATC nucletotides. The Norwegian Researchers’ Night is organised in the framework of the National Science Week, Forskningsdagene, which is held every year with the aim of fostering interaction between the scientific community and the public at large.

Nineteen bioprospecters met at Linken for the 2nd joint workshop between MARZymes and MabCent, June 16, 2011. About half of them were from the commercial partner of the projects, ArcticZymes. Seven seminars were listed on the programme, ranging from project introductions to more detailed target seminars. The crowd shared a great lunch topped with fruitful discussions, and in the evening we went for a beer in sunshining Tromsø city. 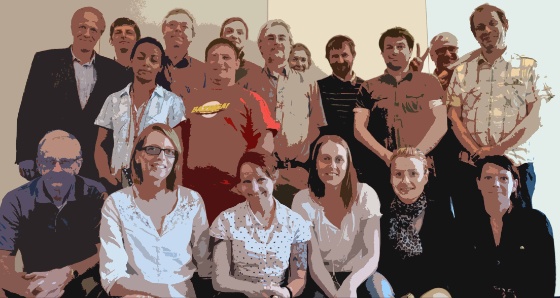 Again, it is time for a joint MARZymes/MabCent workshop with our commercial partner, Arctic Zymes. This biannual workshop presents research, exchanges new ideas and promotes collaborations between researchers in the two sister projects. The day is filled with short seminars about sampling of environmental samples, purification of nucleic acids, challenges within expression of gene products of environmental samples and some new target ideas. 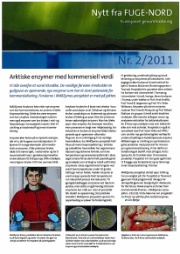 The FUGE-NORD newsletter 02/2011 is about MARZymes. "We are close to a Norwegian Klondike. The northern seas holds a gold mine of intersting, new enzymes that have a great potential for commercialization. Researchers of the MARZymes project are about to hunting for the gold mine."

Marcin presents the MARZymes project at the institute seminar May 18th

On Wednesday May 18th at 12:15, post doc on MARZymes, Marcin M. Pierechod, will give this month institute seminar: “Bioprospecting from Arctic marine metagenomes” at Tabletten, Farmasibygget at University of Tromsø.

Two MARZymers at the SEB 2011 conference in Dalian, China 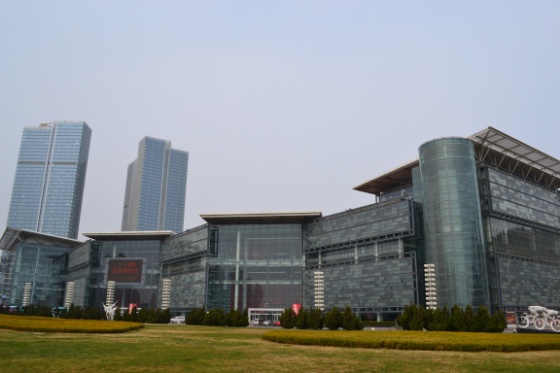 Post doc Adele K. Williamson and senior engineer Gro Bjerga went all around the world to Dalian, China, to present the MARZymes project. BIT's 2nd Symposium on Enzymes & Biocatalysis 2011 (SEB 2011), was successfully held here at the new World Expo Center (left photo), April 25-30, 2011. Totally, there were about 200 participants from more than 30 countries attending the SEB 2011. Five other conferences in related fields were held in parallel. Participants from academic, industrial professionals and key-decision makers delivered the new achievement on their research, together discussed and analyzed the development of enzymes and biocatalysis. Among the program attractions were nine (!) Nobel Laureates, including great talks from Dr. Ada E. Yonath who recently received the Nobel Prize in Chemistry (2009) and Dr. Richard Roberts who received the Nobel Prize in Physiology or Medicine in 1993.

"The MARZymes project I’m working on is a research initiative that aims to discover novel cold-active enzymes from the marine arctic environment, which can be used in biotechnology and industry." Read the whole presentation here. 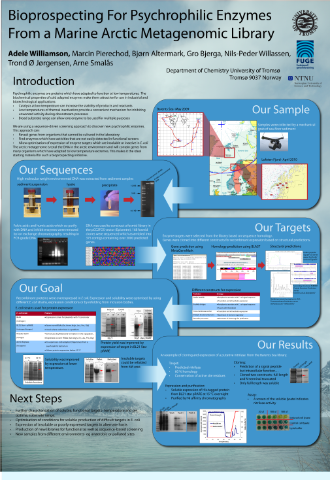 MARZymes published an article in the regional newspaper Nordlys Friday February 25, 2011. Attachment (right menu) contains the Norwegian full-text (no web publication): "In 1986, researchers in Tromsø isolated an enzyme from shrimp thawing water. Today, this enzyme, the alkaline phosphatase SAP, is sold for millions of NOK every year. OECD has estimated that biotechnologi will have a great economical impact on our future. In Canada, the biotechnological production, or bioeconomi, makes up more than 6 % of their country GDP, corresponding to approximately 450 million Norwegian kroners or about half the Norwegian governmental budget. Northern Norway has a unique opportunity to contribute to the Norwegian bioeconomy considering its role in bioprospecting. We scientists in MARZymes have already started."

The MARZymes group has moved into new facilities at Forskningsparken, the Barents BioCentre (black building). The lab is being set up and organised as we speak.

A film about marine bioprospecting, The Cold Rush, was made in three days by director and bioprospector Gro Bjerga, and the crew Walter Ivan Añacata Avendaño, Alexander Elvegård Figenschou, Ralph Kube, and Tino Schott. It was made as part of the Arctic Frontiers Young Scientists Forum video-making workshop in Tromsø, Norway in January 2011.  Scientist-turned Hollywood Film Maker Randy Olson trained in total 25 early career researchers how to communicate their research through video. To learn more about bioprospecting and see we are doing in MARZymes, see the film The Cold Rush.

February 1st 2011 MARZymes is moving into new facilities at Forskningsparken (Research Park) in Breivika, Tromsø. MARZymes will then be united with a sister-project, MabCent, and located in close proximity to the national biobank Marbank and the analysis plattform Marbio in the brand new building in Forskningsparken, and together with the industrial partner, Arctic Zymes.

Our commercial partner, Marine Biochemicals has changed name to ArcticZymes, that better reflect the roots and activities of the company. Read more on their home page.