“nanoAI : Nanoscale artificial intelligence in microscopy and nanoscopy for life sciences”  is an Enabling Technology project funded by Research Council of Norway for a duration of 2021-2025. nanoAI is a highly ambitious project in more than one way. First, its scientific propositions promise to provide a lasting direction artificial intelligence for Microscopy and Nanoscopy(M&N). Second, it aims to create a new research direction in the field of Artificial Intelligence(AI) and redefine the role of AI in M&N. It will position AI as an exciting research direction in bioimaging, where the potential of any modern M&N technique is realized better and faster. It will become a significant factor in the success of modern M&N in the context of value to mankind. Third, it will alter what biologists can achieve in short spans of time and influence the future therapy developments.

nanoAI presents a ground-breaking perspective into interpretability and information representation of the microscopy and nanoscopy data, which allows dissolving the bottleneck (i.e., inability to interpret and analyze the data thus generated and derive meaningful biological inferences from them). On one hand, imaging modality such as 4D nanoscopy holds a treasure of information for thorough study of disease and drug mechanisms. On the other hand, it is practically impossible for biologists to even visually scan the entire data, leave aside analyzing the information over large sample pools. ‘Looking for needle in haystack’ conundrum of bioimaging interpretation problem will be minimized. 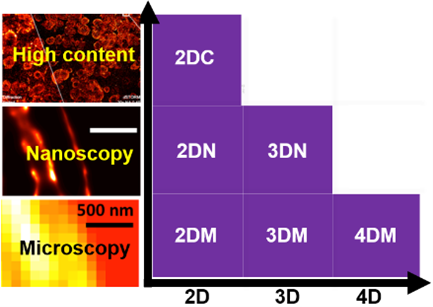 Fig: Scope of nanoAI project is in purple boxes