Cosmic dust and meteoroids and their fragments play an important role in the physical and chemical processes of the upper atmosphere. Cosmic dust and meteoroids impact the atmosphere at high speeds and ablate at ~ 75 to ~ 110 km. As a result, atoms and atomics ions of the metallic elements Fe, Mg, Si and Na, oxides, hydroxides and carbonates exist and form nm-sized meteoric smoke particles (MSPs). These dust particles probably act as nuclei for condensation of water ice and affect the charge balance in the upper mesosphere. The atmospheric circulation system in the Polar Regions in summer causes adiabatic cooling in the mesosphere so that the temperature can be ~ 120 K or lower so that ice particles form on the MSPs.During summer, the dust particles form a core for the condensation of ice particles that lead to the formation of Noctilucent Clouds (NLC) and Polar Mesospheric Summer Echoes (PMSE). The distribution of the solid particles governed by neutral atmospheric dynamics provides a coupling between the atmospheric layers.Size and charge of dust particles are important parameters because they influence growth rates, chemical processes and PMSE formation. By interacting with the ionospheric electrons and ions the charged dust also influences the incoherent scattering process observed with radar. We propose to study the dust in the ionosphere using model calculations, in-situ measurements and radar observations in order to determine the smallest dust size in the ionosphere and dust charging rates. 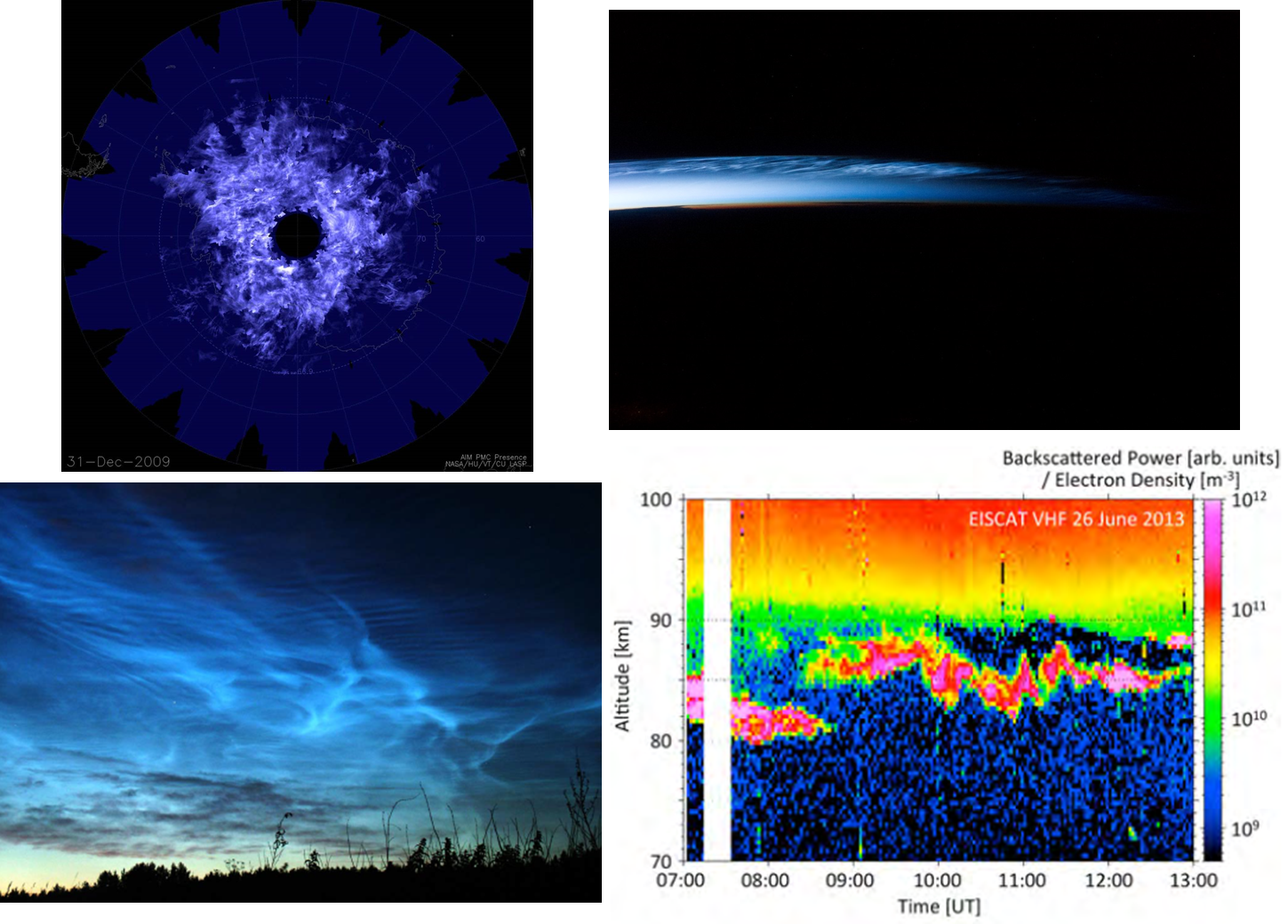 The above figure shows the spectacular phenomena caused by dust in the upper mesospheric altitudes in summer polar region. The top right and left images show the polar mesospheric clouds observed from satellite and International Space Station (Courtesy: NASA). The bottom left figure shows the clouds photographed from ground and are also known as noctilucent clouds (Dubietis et al., 2011). The bottom right shows intense backscattering of radiowaves by the smaller ice particles that are not large enough to scatter the visible wavelengths effectively (Mann et al., 2016). This project studies such features in addition to the effect of dust in non-summer periods.

The primary objective of this project is to reveal the sizes, size distribution, composition and charging rates of mesospheric dust particles and to formulate measurement questions for future sample return observations. The secondary objective is to study the influence of charged dust on PMSE formation and incoherent scatter spectra and to define a program of future incoherent scatter observations.